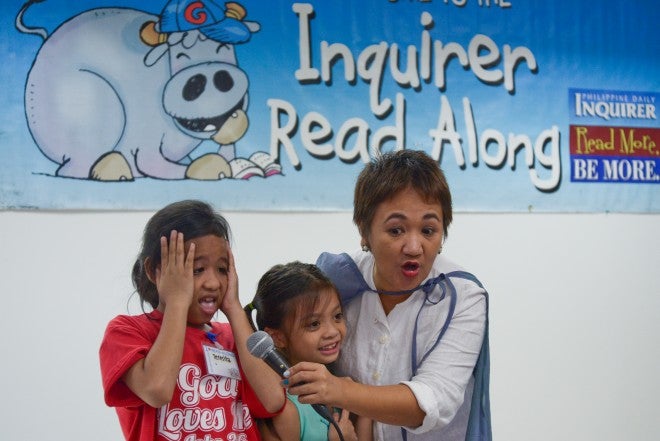 An act of heroism is not measured by how grand the deed is but by how sincere a person is in helping others.

The Inquirer Read-Along session on Saturday delivered this message through real-life heroes who regaled some 85 children with inspiring stories about bravery, sincerity and heroism.

Umali read “Ang Alamat ng Papaya,” also written by Villanueva, a story about how the Pya-a’s courage and loyalty led to the birth of the first papaya.

Justo read “Marvino’s League of Superheroes” by Rae Rival-Cosico, a story of a young boy who drew superheroes inspired by the country’s national heroes. 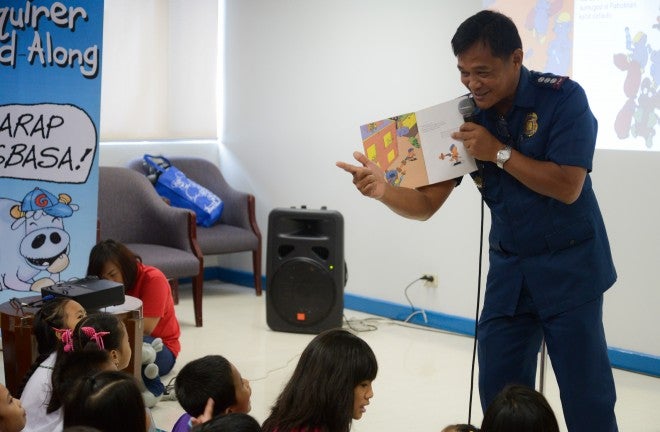 “From the story, I learned that as long as you show sincerity and goodness to others, people will also be good to you,” said Umali, star of the upcoming GMA-7 soap “Maybe this Time” and a first-time Read Along reader.

Cascolan, Philippine National Police deputy regional director for operation in the Autonomous Region in Muslim Mindanao, is one of the Metrobank Foundation’s Outstanding Police Officers 2015.

“It feels really good talking to the children. At first many of them had negative image of the police. I am glad to have a chance to show them a better image,” he said.

Ignacio, an Air Force colonel and a Metrobank Outstanding Philippine Soldiers awardee, said reading to the children made her feel like a child again. “The act of storytelling and immediately seeing that the kids felt happy and inspired by our story—that’s the best part for me,” she said.

Banan, a teacher of English and Mandarin at the Ernesto Rondon High School in Quezon City, is among the winners of Metrobank’s Search for Outstanding Teachers. Though she has been teaching for almost three decades, she “felt a bit challenged how to read to younger kids.” 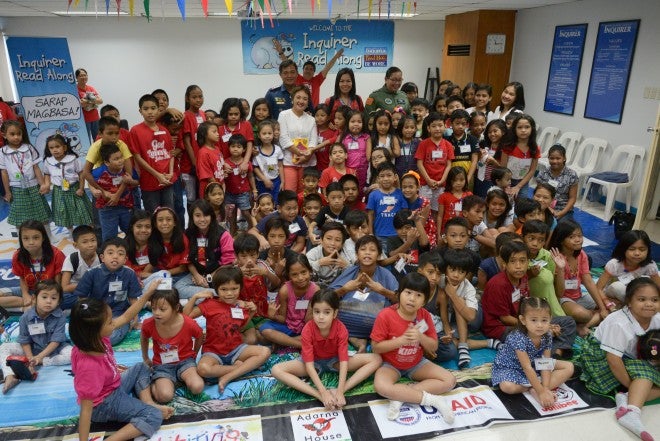 According to Cascolan said that like the kids, he learned something from the story he read. “An important lesson from the story is to always be hardworking and honest in your work. A policeman should be a good example to children at all times,” he said.

“For the kids, you don’t know when you’ll get the chance to be a hero. Modern-day heroes are those who help in serving their community. We need to share even just a bit of assistance or help to our neighbors, our government. Every small act, when collected together, becomes a big thing for our countrymen,” he said.

Ignacio said that through the story that she read, “we learned that even if you are just a child, you are valuable and capable of contributing to the community”.

Banan, on the other hand, stressed the lessons from Carancal’s story. “I think it is very important that children learn that size—whether it is in the physical, mental, or economic aspect of life—doesn’t matter in becoming a hero. Even if you are small or young or not rich, you have a purpose,” she said.

Grade six students Jenna, Angela, and John from Plainview Elementary School in Mandaluyong also chose the Carancal because it demonstrated that size was not a limitation to doing good.