In search of Sultan Kudarat’s grave 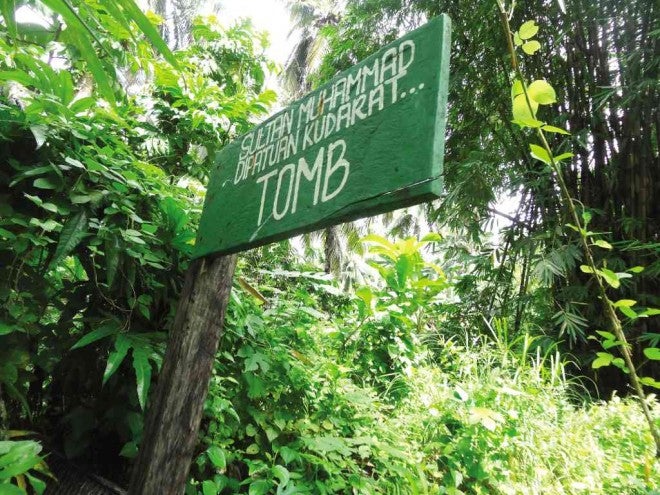 A marker supposedly identifies the burial site of Sultan Kudarat on the Barangay Simuay seashore. The site is said to have been landscaped several times in the past. NASH MAULANA/INQUIRER MINDANAO

Muslim hero, Sultan Muhammad Dipatuan Kudarat, died 340 years ago, but the debate on where he was actually buried remains alive to this day.

Kudarat, who was declared a national hero by then President Ferdinand Marcos on Jan. 13, 1975, led Mindanao’s fight against the Spaniards who tried to expand their colonial conquest of the Philippine archipelago to the south and convert its people to Christianity. He called the invaders slave makers who should be fiercely rejected.

He became Maguindanao’s sultan after succeeding his father, Kapitan Laut Buisan, in 1619 and subduing many kingdoms. He was said to be 90 when he died in 1671, probably of old age, according to some historians.

Conflicting claims on Kudarat’s burial place have made it difficult for the government to determine the official site, said Ludovico Badoy, executive director of the National Historical Commission of the Philippines (NHCP).

One such place is in Picong (formerly Sultan Gumander), Lanao del Sur. Its mayor, Alinander Balindong, said residents of the sixth-class municipality (annual income: below P15 million) believe that the hero’s remains are kept in an old tomb by the Ramitan River. This explains why the municipal council plans to ask the NHCP to declare it a national shrine.

The people cite historical accounts that the sultan withdrew and died there after he lost the Battle of Lamitan to Governor-General Sebastian Hurtado de Corcuera in 1637, Balindong said.

Sonaira Amatunding, a descendant of Kudarat, said the tomb used to be some 50 meters from the riverbank, but the changing course of the waterway gradually eroded the burial ground.

Those living along Ramitan pointed at signs indicating that it is Kudarat’s tomb. “One sign is that grasses don’t grow over the tomb, while the tallest of grass species abound,” said Bapa Kador, who is said to be more than 100 years old and the oldest among the residents.

Kudarat’s direct descendants, however, have claimed that the Maguindanao sultan was buried along the Simuay seashore, next to Jesuit priest Padre Melchor Lopez and Rajah Pulalon.

Lawyer Ishak Mastura, another offspring, said it took sometime for the clan elders to establish Kudarat’s burial place in Maguindanao, noting that it was hardly mentioned in historical accounts, but only by some chronological narratives told orally through generations.

Maguindanao Sultan Abdulaziz Guiwan Salem Mastura Kudarat V said the sultanate passed last year a resolution asserting that the supposed tomb in Ramitan village was actually the historical spot where the hero stood and delivered his “famous speech” to rally the natives against the Spaniards. The event was documented by Spanish chronicler Francisco Combes.

Kudarat’s supposed tomb on the shore of Simuay has been visited by historians and archaeologists, the sultan said, and that he was told by the municipal administrator of Sultan Kudarat, Datu Mando Mastura, that the local government would soon concur with the sultanate’s resolution.

Read Next
INC members from Lucena, Bicol to join brethren in Edsa rally
EDITORS' PICK
Kai Sotto continues to inspire Filipinos by sharing his passions and stories with Smart Prepaid
1Sambayan to nominees: Stick to word of honor
EDITORIAL: Good news, bad news
Alex Eala wins Grand Slam on Independence Day: ‘I hope I made my contribution to the country’
Trust Robredo’s political instincts – Kaya Natin! convener
Ahead of ONE: Full Blast II, Mongkolpetch warns Elias Mahmoudi: ‘Watch out for my fists’
MOST READ
China cautions G7: ‘small’ groups don’t rule the world
Duterte, Mayor Sara unlikely to run under same slate in 2022, says Lacson
1Sambayan to nominees: Stick to word of honor
PH to have cloudy, rainy Monday — Pagasa
Don't miss out on the latest news and information.