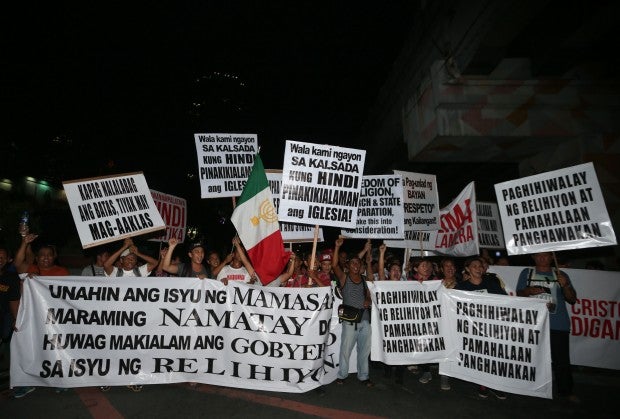 One of the instructions of President Benigno Aquino III in dealing with the Iglesia Ni Cristo (INC) protest was to ensure that no one should take advantage of the mass action for his or her personal gains.

“The President mentioned specifically that government should ensure—at least, the executive branch—that there are no opportunities for those who may want to take advantage of the situation for their personal end,” Deputy Presidential Spokesperson Abigail Valte said in a DZRB interview on Saturday.

When asked if Malacanang has a message for politicians who are exploiting the INC’s grievances, Valte refused to respond to the question because she said the government’s primary concern is for the Edsa traffic, which the protest is worsening, not to inconvenience motorists anymore.

Binay earlier said that the members of the influential religious sect could not be blamed for resorting to mass action to protect the independence of their church from the administration’s “clear act of harassment and interference.”

Seemingly wooing the INC which known for its bloc voting, the presidential aspirant also argued that the INC protest was an “exercise of their right to assembly and free speech, which are also guaranteed under the Constitution.”

Like Binay, Senator Grace Poe, who is among the top contenders for presidency in terms of high survey ratings, said the INC members were only “defending their faith.”

“Huwag nating mamaliitin ang importansya ng relihiyon. Para sa akin, ang mga tao na yan, ang dinedepensahan nila ay ang kanilang paniniwala. Nirerespeto natin ‘yan at kailangan ay pangalagaan din ang kanilang mga karapatan (Let us not underestimate the importance of religion. For me, these people are only defending their beliefs. We respect that and it is a must to take care of their rights),” she said recently in an interview in Nueva Ecija.

Aquino reportedly called for an emergency meeting in Malacanang on Friday as INC followers started gathering on Edsa Ortigas and Shaw Boulevard as a continuation of what they called a “vigil” outside the Department of Justice in Manila.

Valte said Aquino instructed Secretary Manuel “Mar” Roxas II as the Department of Interior and Local Government head to meet with the concerned officials of the local government and Philippine National Police (PNP).