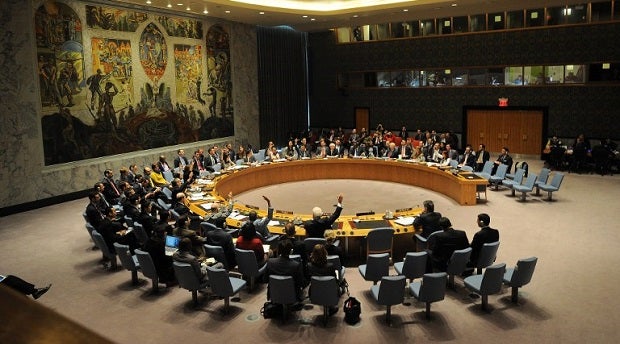 UN Security Council members vote on a resolution on Ukraine at the United Nations headquarters in New York on March 15, 2014. AFP

PARIS, France—The 195-nation UN climate talks resume Monday when rank-and-file diplomats gather in Bonn to lay the foundation for a global climate pact to be inked in December.

Dozens of issues have stymied the negotiations, now into their third decade under the auspices of the UN Framework Convention on Climate Change (UNFCCC).

Here are the key points of contention:

All countries agree that greenhouse-gas emissions which drive warming must be curbed. But by how much?

The UN has endorsed a ceiling of two degrees Celsius (3.6 degrees Fahrenheit) over pre-industrial levels.

But poor countries and low-lying, small-island states—which will be hit first and hardest by climate change—say 2.0 C is not good enough, and favor a tougher goal of 1.5 C (2.4 F).

Timing is important too: To have a 50/50 shot at 2 C, global CO2 emissions must peak by 2025 and drop dramatically thereafter.

By 2050, humans must no longer be adding CO2 to the atmosphere.

The 1992 UNFCCC charter enshrines a principle that rich countries historically caused the problem, and should do more to fix it.

That divide was entrenched in the Kyoto Protocol which went into force in 2005 and placed emissions-curbing targets on industrialized nations only—excluding the United States which did not sign up.

Much has changed: Fast-growing China and India have become the world’s No. 1 and No. 4 carbon emitters, and others who were labeled “developing” countries 25 years ago, have since scaled the economic ladder.

At the same time, the European Union and United States have slowed their carbon pollution.

Whether, or to what extent, the original “differentiated responsibilities” principle should be abandoned or modified is hugely contentious in determining how to set emissions goals, verification rules, and the flow of financial aid.

One of the few concrete decisions to come out of the 2009 UN climate conference in Copenhagen was a pledge from rich economies to muster $100 billion (89 billion euros) per year in financial support for poor countries, starting from 2020.

Some of that money will help poor and developing countries adopt technology to curb their own emissions. The rest will be earmarked for measures to adapt to climate impacts, like rising seas and spreading deserts, which can no longer be avoided.

Where that money will come from and how it will be distributed still has to be worked out.

More recently, least-developed countries, small-island and developing states have presented an additional demand for compensation for climate “loss and damage” to come—a non-starter with rich nations.

The proposed Paris accord will have as its backbone a roster of voluntary national pledges for reducing carbon emissions.

China, the US and the EU—which together account for more than half of global carbon dioxide (CO2) pollution—have already submitted theirs.

But scientists say the sum of global commitments is unlikely to meet the 2 C objective.

As a result, some countries have proposed putting in place a strict review process, starting in 2020, to see if the 2 C goal is on track and, if not, how countries can ratchet up their contributions.

UN urged: ‘Substance rather than process in climate talks’