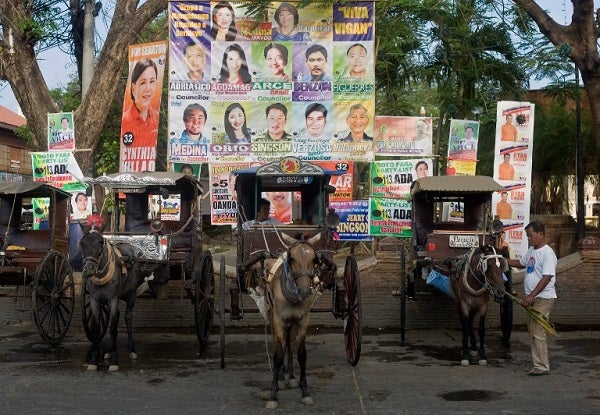 In the election season of 2016, money will once again “flow into media,” veteran journalist Marites Dañguilan Vitug said on Friday, as she cautioned reporters to resist temptation from candidates with fat purses.

To illustrate her point, she talked about a text message she received recently from a former government official. “He asked me if I could support Vice President (Jejomar) Binay to spin for the presidency,” she told a roomful of journalism students.

“I politely replied that journalists are not allowed to publicly endorse candidates. We cover them, we chronicle their comings and goings as fairly as we can, but we cannot announce our support for any of them,” Vitug said.

She said she thought that was the end of it when another text message came from the official: “How about privately supporting Binay? [Like by sharing] some advice on how to handle the media?”

“I left that unanswered,” said Vitug, editor at large of the news website Rappler and author of the best-selling book “Shadow of Doubt: Probing the Supreme Court,” which exposed secrets in the high tribunal.

One thing she has learned is that many politicians simply do not understand the concept of media ethics, Vitug said.

Covering the Batasang Pambansa during martial law in the early 1980s, she recalled two instances when a member of parliament, or MP, tried to give her cash. “As I became familiar with the MPs, a couple of them, through their staff, sent me cash,” she said.

It is what they called “smiling money” because “it is not meant to pressure you to write a story with a certain angle, or kill a story,” Vitug said. The other kind is “blood money,” where the journalist is basically “paid to do the person’s bidding.”

In both cases, she said she returned the money with a note telling the MP, “journalists do not need to get paid extra to do our work.”

Both MPs apologized to her. One, a representative from Luzon, even sent her a broom and a basket of vegetables as a gift.

“He said he wanted me to remember his province,” she recalled. A few years ago, the same MP sent her a book with a note saying he had not forgotten the experience with the envelope.

“I learned two lessons from this episode,” she said.

First, “journalists should make the public understand, especially PR practitioners and politicians, that bribes, whether smiling or blood money, are a no-no,” she said.

“We have to explain to them it’s our duty to report as fairly as we can, and we are paid to do this by our news organizations. If news subjects pay us, then they are attempting to break our sacred calling,” Vitug said.

On Friday, Vitug delivered the 9th Teodoro Benigno Lecture on Journalism at the Ateneo Professional Schools in Makati City, focusing on ethical and legal challenges faced by media practitioners.

It was organized by the Foreign Correspondents Association of the Philippines, which invited journalism students from different schools to listen to the talk.

Ethical violations by the mass media, Vitug said, should be seen for what they are—corruption.

“In our country, (ethics) is a field that is not deeply rooted in our culture. It is looked at as a light offense, way below corruption, but I say that ethical violations are a form of corruption,” she said.

“It’s about time we treat them as such. Otherwise we will always have a cavalier attitude toward ethical breaches,” Vitug said.

As the election campaign heats up, the problem of media corruption will only be magnified, she said.

“Next year, we will be voting new leaders into office. The stakes are high. Honest media organizations will definitely help level the playing field during the campaign so we should have a minimum of spin, and a minimum of paid political agenda,” she said.

Vitug lamented that after more than 30 years as a journalist, she observed that “corruption in media is still very much around.”

“Before, politicians and their public relations people gave journalists cash in envelopes. Today one gets a text message saying the money has been deposited in one’s ATM account,” she said. “It’s so easy. All one has to do is withdraw the thousands of pesos, sometimes hundreds of thousands of pesos.”

The second lesson is that editors should be very strict and rigorous in observing and implementing ethical standards “because they set the example,” she said. “They should sanction reporters for ethical violations.”

Some media organizations are already doing this, she said, citing examples from ABS-CBN and the Inquirer. (She mentioned the case of a journalist who was fired by the Inquirer for ethical breaches.)

Vitug said she discovered that many politicians were just ill-informed and needed education about how journalists worked.

Still, her coverage on the Congress beat was put abruptly to an end after another attempted payoff.

“A staff member of the Cabinet minister dropped by and distributed envelopes. I thought it was the usual press release. Instead, I saw peso bills. My heart raced and as I looked around, I saw others in the press room receiving the same white envelopes,” Vitug recalled.

She immediately called her editor, Raul Locsin, who told her to turn over the money to the desk, which then donated the cash to charity. “The recipient was asked to sign a receipt acknowledging the donation, and this was returned to the giver,” she said.

She thought that was the end of it.

“But one of our columnists heard about it from Mr. Locsin, and she wrote about it. It was a juicy item because it involved a prominent official who happened to be close to then first lady Imelda Marcos,” Vitug said.

“That’s when my troubles began,” she said.

“Certain MPs who had become more vocal after (Ninoy) Aquino’s assassination latched on to any issue against (Ferdinand) Marcos. They called for an investigation into the payoff, just like your usual investigation in Congress,” Vitug said.

“I was asked to testify and the whole episode left me isolated,” she said. “My colleagues wrote a letter saying none of them received any cash from the Cabinet minister,” she said.

“It was a very tough time for me, and eventually Mr. Locsin pulled me out of the Batasang Pambansa,” she said.

But Vitug’s experience did not faze her views on the need to stamp out corruption in the media.

“Media is a pillar of democracy. We play the role of watchdog; we hold public officials accountable; we beam our search lights on the dark corners of institutions; and we are a vehicle for the national conversation,” she said.

“If this cornerstone of democracy is stained and vandalized, it no longer fulfills its duty. A corrupt press … marginalizes those who question the status quo and gives little space to those who call attention to the influence of vested interests on government policy,” she said.

“All of us, the media and public, should work together toward zero tolerance for corruption in the newsrooms,” she said.

Vitug, however, admitted that she was guilty of at least one ethical transgression.

“I have a confession. I violate the number coding,” she said to laughter. “I only have one car, so I hang my media ID. Sometimes I would get stopped, and I would apologize, ‘Nagmamadali (I’m in a rush), sir,’” Vitug said.

During the open forum, Jim Gomez of the Associated Press asked where she would draw the line in receiving gifts during Christmas, a Filipino tradition.

For his part, he said he would not accept a single peso from someone like alleged pork barrel scam mastermind Janet Lim-Napoles. But what if the Asian Development Bank sent a 4-gigabyte USB drive as a gift?

Vitug said news organizations had differing policies on accepting gifts. In her earlier years as a journalist, she recalled that reporters were allowed to accept Christmas gifts that would not exceed their salary, which was paltry at the time.

“Personally, I accept gifts during Christmas but they’re really just wine,” she said. “I don’t know, nobody gives me beyond wine,” she joked. Food and other perishable items sent to the office would usually be shared with the rest of the staff, she said.

The normalization of corruption