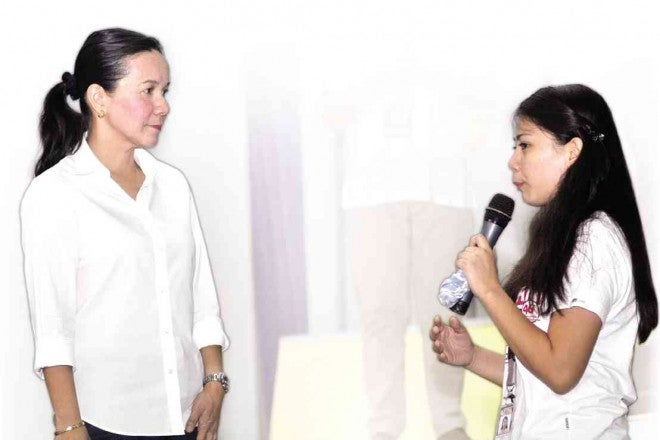 DAGUPAN CITY—Sen. Grace Poe went to vote-rich Pangasinan on Wednesday to talk about issues close to students’ hearts, but kept the suspense up on whether or not she is running for higher office in 2016.

Poe talked about slow Internet connection, the need for scholarship for college students in state universities and colleges, the need to pay students for internship or on-the-job training in government offices and incentives to graduates of agriculture courses.

Despite being noncommittal about her 2016 plans, Poe’s supporters distributed pins bearing her name and the year 2016.

Reminded about her statement during a visit here in June when she said her decision to run for President was on a 5 in a scale of 1-10,  Poe this time declined to give a categorical answer.

“I don’t want to talk about numbers anymore. Please just let me continue going around to find out how I can help [people]. There are [candidates] who say they will run, that they are already ready. But what is important is if you decide [to run], what will your solutions be to the problems the country is facing?” she said.

Poe’s father, the late actor Fernando Poe Jr., traced his roots to San Carlos City in central Pangasinan. Her Dagupan visit took her to Lyceum Northwestern University and University of Luzon. She also met representatives of the business sector here before proceeding to another engagement at the Virgen Milagrosa University Foundation (VMUF) in San Carlos City.

Poe said she was reaching out to students, just as she reached out to farmers and other sectors to learn about their concerns.

“I am happy to talk with young people. Their needs are much more than food and education but also job opportunities and internships. I also have children so I am concerned about them,” she said.

She said education is still an objective difficult to attain for millions of Filipinos. She said of 14 million children who enter Grade 1 every year, only 500,000 continue and finish college.

The students welcomed her announcement that in the 2015 General Appropriations Act, P1.6 billion was set aside to establish free Wi-Fi connection in third to sixth class towns (annual average income of P90 million and below to

Internet access, Poe said, is considered as a “great equalizer” because it gives people in remote areas access to information.

On questions about her citizenship, Poe admitted she gets hurt when her being a foundling is raised by her detractors.

“It hurts although I’m preparing myself to address the legal issue on my being a foundling,” she said.

“It is like they are saying I am a liar because I say Fernando Poe Jr. and Susan Roces are my parents. It’s oppressive. They adopted me, they went through [the] court [and followed] procedures to legally adopt me,” she said.

In San Carlos City, relatives of Poe expressed concern she might suffer the fate of her father if she runs for President. “She might not be able to withstand the pressure from the vultures out there,” said Mannie Pou Silva, daughter of the elder Poe’s cousin, Rodolfo Pou.

Pou is the original spelling of the family’s surname. Their grandfather, Lorenzo Pou, was from Majorca, Spain.

FPJ died on Dec. 14, 2004, seven months after he lost to then President Gloria Macapagal-Arroyo in an election widely perceived to be characterized by fraud.

“Politics is dirty. In politics, even if you’re honest and good, there will be always issues against you,” Silva said.

“Why only now?” Ferrer said. “It’s painful, you know. But we are proud of her. She’s doing her best. That’s why people are pushing her to run for President,” said Silva.

At the student forum at VMUF in San Carlos, a student asked Poe if the country will have a President from San Carlos City next year. “Only you can answer that,” Poe said. Yolanda Sotelo, Johanne Margarette Macob and Gabriel Cardinoza, Inquirer Northern Luzon