The Philippine National Police will be on full alert status in Metro Manila following the staging of a protest by members of Iglesia ni Cristo at the Edsa shrine in Ortigas, Quezon City.

According to National Capital Region Police Office director Chief Supt. Joel Pagdilao, the alert status in NCR has now been raised to full alert and Task Force Manila Shield has been activated.

Pagdilao said the alert took effect at 6 p.m. on Friday, adding antiriot cops would also be deployed at the People Power monument along Edsa near White Plains in Quezon City.

The policemen guarding Edsa shrine on Friday were seen to have no shields or truncheons.

Iglesia ni Cristo members have gathered on the northbound lane of Edsa near the shrine, some of them converging right under the flyover, as they chanted “INC” and “Hustisya” to protest the supposed meddling of Justice Secretary Leila de Lima in the affairs of their church.

As they marched northbound, a member was heard shouting, “Lulusubin natin ang Malacañang!” The protesters later retreated and returned to the vicinity of the Edsa shrine.

Some INC members parked their vehicles at Robinsons Galleria mall located beside Edsa shrine as the protest continued late on Friday. Julie Aurelio/RC 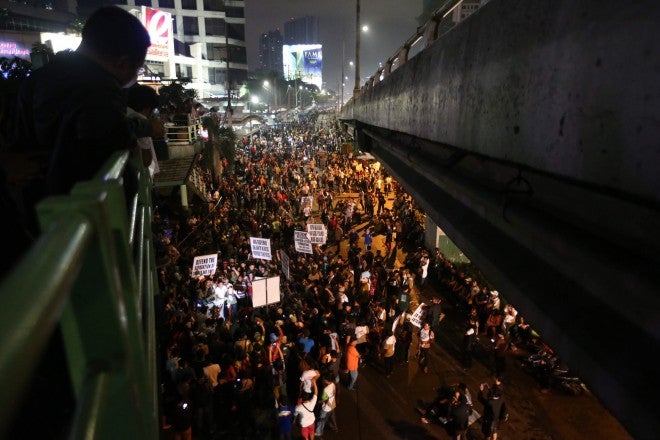