The protest of Iglesia ni Cristo (INC) members near the Department of Justice (DOJ) compound continues with no signs of stopping any time soon.

The number of protesters has increased to 3,000 on Friday, authorities said, with figures still expected to balloon as INC members from nearby provinces are also set to join the vigil.

Major Rogelio Gabad of the Manila Police District told INQUIRER.net that as of 12 noon, the number of INC protesters has already exceeded yesterday’s headcount, which was set at around 2,000.

BACKSTORY: INC protesters vs De Lima swell to more than 2,000

Gabad said around 100 policemen from MPD have been deployed around the vicinity to ensure peace and order throughout the INC vigil, which is expected to last until Saturday or on Monday.

READ: More cops to be deployed in INC protest

Gabad said 24-hour security will not be an issue as policemen work through shifts.

Gabad also said the situation in the area has been “generally peaceful” since Thursday as no untoward incidents were recorded.

Three security guards from the National Bureau of Investigation (NBI) and the Bureau of Corrections (BuCor), however, were arrested early Friday for allegedly pointing a gun at the protesters.

He added that traffic along Taft Avenue was relatively moderate as in ordinary days, as only the stretch of Padre Faura has been closed to motorists since Thursday noon.

But jeepney driver Danny Gatmaitan said the INC could have been more considerate in staging their protest, noting that the closure of Padre Faura congested the main road and even alternate routes.

(I just they thought of the burden they would be imposing on the drivers and our passengers.)

A UV Express van driver who refused to be named added that Padre Faura’s closure contributed to the congestion of other streets along Taft Avenue, which drivers like him use as “backdoors” or shortcuts during heavy traffic.

A program is still ongoing at the small stage set up in front of the DOJ. Monitors were also placed along Padre Faudra for INC members who cannot see the stage from afar.

The atmosphere is festive as INC members are being treated to song and dance performances by their fellow brothers and sisters.

Documentary and music videos of INC are also being shown.

INC members, some of whom are holding placards calling for the separation of church and state, are shouting “Mabuhay ang Iglesia Ni Cristo” and “Igalang ang pananampalataya” in unison.

The protesters were seen eating their lunch and taking a nap on sidewalks and waiting sheds. Some even brought sleeping tents and mats.

INC member Jenice Agulto, who arrived from Cavite with her family and friends this morning, said they are planning to stay until Monday.

“Kaninang 11 a.m. lang kami pero dito na kami mag-o-overnight baka hanggang Lunes (We have been here starting 11 a.m., but we plan on staying maybe until Monday),” Agulto said, adding that there was no official advisory from the leadership on until when the vigil will last.

Mary Altraso, who also came from Cavite, said they will stay “until the end.” 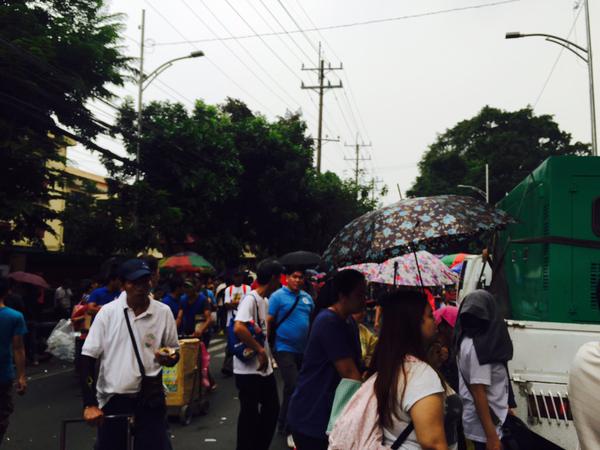 Altraso added that members who arrived Thursday were from Metro Manila alone, while those who arrived Friday hailed from the Calabarzon region.

“Naniniwala ba kayo sa forever? Ako oo. (Do you believe in forever? I do.) INC forever!” the program host said.

Rain started to pour in Padre Faura as of 4 p.m., but INC members said it will not stop them from fighting for what they believe in.

Calling for a separation of church and state, INC members said De Lima should focus on “more important issues” such as the botched Mamasapano operation instead of “prioritizing” the illegal detention case filed by dismissed INC minister Isaias Samson against the church leadership. Yuji Vincent Gonzales/IDL

Read Next
CPP leader pleads not guilty to murder charge
EDITORS' PICK
On Day 2 of implementation, gov’t says workers now exempt from ‘no vax, no ride’ policy
Gear up and get ready to play with Yamaha Mio Gear
DOH: 28,471 new COVID-19 cases in PH; active cases now 284,458
Acer starts the year off strong with the Aspire Vero National Geographic Edition
Over 3 Million worth of prizes to be won at Smart Padala’s SENDali Manalo Promo!
Metro Manila posts lowest temperature yet this ‘amihan’ season at 19°C
MOST READ
Cold-case investigation names surprise suspect in Anne Frank’s betrayal
Emma Stone calls Andrew Garfield a ‘jerk’ after he ‘lied’ about his ‘Spider-Man: No Way Home’ appearance
Czech anti-vax singer dies after deliberate infection
Derek Ramsay on being married to Ellen Adarna: ‘Gumaan ‘yung mundo ko’
Don't miss out on the latest news and information.