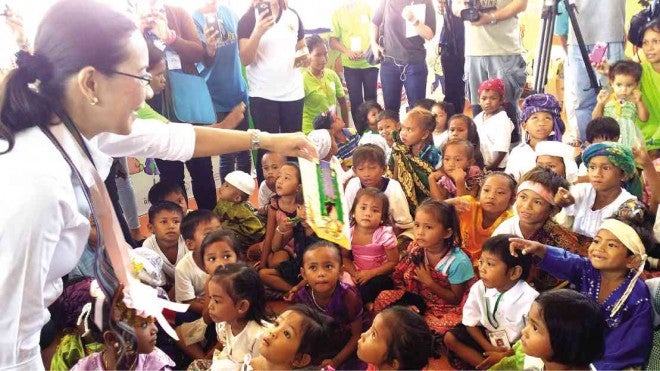 SEN. GRACE Poe shows pictures in a book she is reading for Badjao children in Zamboanga City

ZAMBOANGA CITY—The contrast between Mar Roxas, the suitor, and the woman he is wooing to be a partner in politics, Grace Poe, became clear during their separate visits to different areas in Mindanao on Tuesday.

Poe proceeded to a convent and Roxas, who is trying to relive his days as “Mr. Palengke,” went to market.

Poe, who topped the Senate race in 2010, briefly visited a so-called transitory site for residents displaced by the terror attack by followers of Moro leader Nur Misuari and the war that followed it.

As did President Benigno Aquino III and his mother, the late President Corazon Aquino, prior to taking a plunge into elections, Poe went to the Carmelite Sisters convent on RT Lim Boulevard for a short retreat.

Talking to reporters after the retreat, Poe said she went to the convent upon invitation by one of the nuns, Sister Agnes. She said it, too, was a suggestion by Aquino.

“During my recent talk with President Aquino, he told me that when he did a lot of thinking and introspection, he visited Sister Agnes,” Poe said.

“He told me to see her. When I met Sister Agnes in Manila a few weeks ago, she told me to drop by when I come to Zamboanga that’s why I am here now,” Poe said.

At the retreat, Poe recounted Sister Agnes’ recollection of how Aquino went through the same agonizing process of deciding whether to run.

She described the retreat as refreshing.

“It’s also nice to have that kind of feeling and it’s very liberating. It’s as if you’re detached from politics. It provided the wholesome, holistic reflection that you need to do,” Poe said.

She said Sister Agnes also told her about her daily vocation with prayers being the center of her everyday life.

“It’s not an easy vocation from my perspective. I really admire what they do every day. It is something admirable and something that we need in politics, to give time and have time to listen to the right voice,” Poe said.

Pressed to reveal if she is running or not, Poe continued to keep her cards close to her heart.

“Of course, people don’t want to be kept in suspense,” she said.

“But I feel this is a huge responsibility, and it’s not just about deciding but it’s also about offering solutions for many of our country’s problems,” she said. 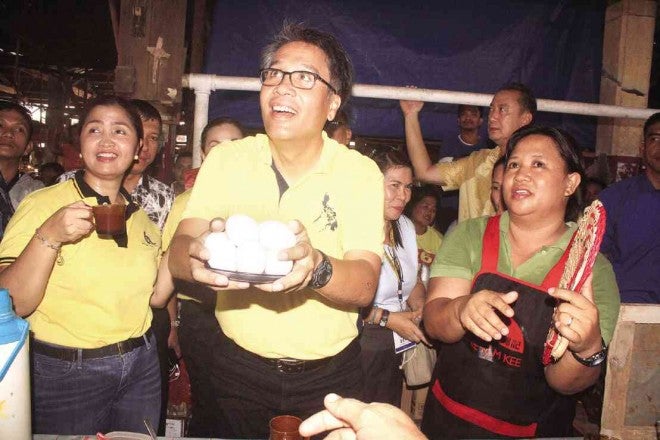 Poe said Aquino “has given us an example of how a leader can be trusted, credible, honest and we know he does not steal from the government.”

When asked again if she was running for President, she said she would make the announcement in October.

In Iligan City, Roxas went to the public market in Barangay Palao after guesting on a local radio program.

He told the crowd there that he would continue Aquino’s “tuwid na daan,” which government critics had assailed as an empty slogan.

Roxas, interior secretary and Aquino’s anointed one, said he continues to woo Poe to be his running mate.

“It was President Aquino who invited her but we still don’t know her decision,” Roxas said.

Roxas went around the market, had coffee with government officials and distributed boiled eggs to people who had gathered at the market to check what the fuss is all about. Julie Alipala and Richel Umel, Inquirer Mindanao