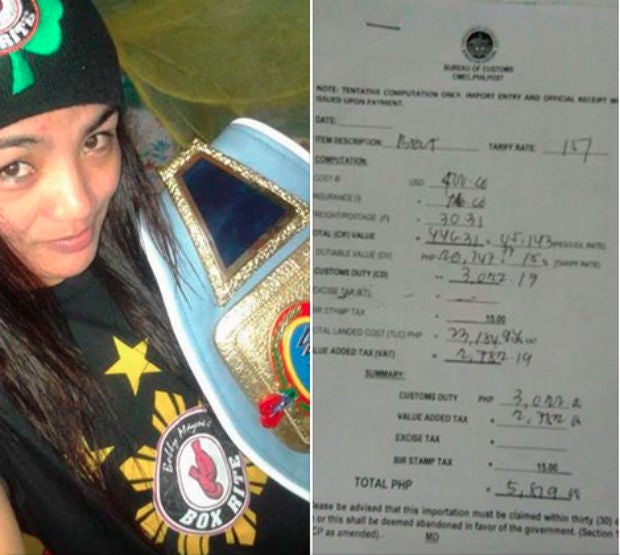 Almost P6,000, a dismayed mixed martial arts winner found out when the Bureau of Customs (BOC) imposed a tax on her championship belt despite the law exempting medals, awards and similar recognition from import duties.

Jujeath Nagaowa, who brought honor to the country by winning the flyweight championship, had to pay P5,809 last month to retrieve the championship belt shipped to her from Macau by the Women’s International Boxing Association.

Nagaowa said she had no idea where the BOC got the $400 estimated value of the belt that she won on June 6 at Forum de Macau in a boxing match against China’s Luo Yu Jie.

“I do not know how (the BOC) came up with that price, but as far as I know, (the belt) should have been exempted from tax because it is a prize,” the 27-year-old Nagaowa said.

Under Section 105 (h) of the Tariff and Customs Code of the Philippines, “medals, badges, cups and other small articles bestowed as trophies or prizes, or those received or accepted as honorary distinction” are among items categorized as “exempt from the payment of import duties.”

Nagaowa said the customs officer, whom she did not identify, had computed the prize based on the estimated value of a different championship belt, allegedly worth $700.

Sought for comment, Customs Commissioner Alberto Lina said that “normally, awards have monetary value so they will be charged (duties and taxes). But that can be reimbursed (if they get) an exemption from the Department of Finance.”

Lina added that the belt was taxed because it passed the postal system. “Had (Nagaowa) arrived at the airport wearing that belt, she could have been accommodated and not charged duties (at all).”

The flyweight champ said she and her manager could have insisted on the championship belt’s exemption from customs duties but they were busy with other matters and decided to pay to get it over with.

The BOC last week came under fire over Lina’s directive for customs officers to open and inspect balikbayan boxes that, he said, were being used to smuggle in appliances and other high-value items.

But public outcry from netizens and families of overseas Filipino workers (OFWs) who expressed alarm over possible pilferage of items they had painstakingly saved for, prompted President Aquino to stop Lina’s order on Monday.

According to President Aquino, the balikbayan boxes, some 7.2 million of which are sent to the Philippines every year, are “a tangible sign of the (OFWs’) love and concern for their family.”

Aquino instructed the BOC to instead use X-ray machines to inspect balikbayan boxes, and to open them only when the X-ray image reveals something derogatory among their contents. Should the box need to be opened, a representative from the Overseas Workers Welfare Administration and the OFW groups must be present and the procedure recorded on CCTV to avoid pilferage and tampering, the President said.

The BOC has also been criticized widely for its perceived selective application of the Tariff and Customs Code, which has resulted in the rampant smuggling of rice, garlic and even undervalued luxury cars transported through the country’s ports in Cagayan province, Subic in Zambales province and Mindanao. Jeannette I. Andrade, Philippine Daily Inquirer, With a report from Jerry Esplanada

Aquino orders BOC: Only suspect OFW boxes must be opened