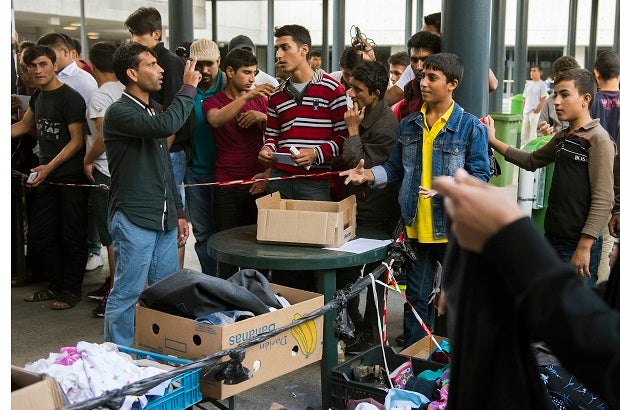 Migrants line up for the distribution of clothes at Keleti railway station in Budapest, Hungary, Friday, Aug. 21, 2015. AP

“It’s surreal,” Csaba Havasi, a commuter, told AFP at the city’s Keleti (Eastern) Station as he made his way past hundreds of men, women and children from the Middle East and Central Asia sitting on the ground.

Clothes hang to dry on stairwells and the wail of babies is almost constant as people clamor for water and medical help from a volunteers’ group organized through social media called Migration Aid.

Occasionally, the volunteers don clown outfits to entertain the children or give them chalk to draw pictures on the ground.

“Seeing the babies in distress is heartbreaking,” said Judit Moser, a 60-year-old local woman as she dropped off nappies and toys with the volunteers.

“As a grandmother I cannot imagine how desperate a parent must be to set out on such a long journey. We have to help these people,” she told AFP.

Budapest City Hall has laid on showers and toilets at the stations, in dedicated areas called Transit Zones.

But the Migration Aid workers, who have been collecting and distributing donations since June, say much more needs to be done.

“Some help is better than nothing though,” one volunteer, who asked not to be named, said of City Hall, accusing the government in contrast of doing nothing but “victimizing” asylum seekers.

As Europe struggles with its worst migrant crisis since World War II, Hungary has become—like Italy and Greece—a “frontline” state.

So far this year, police say around 141,500 migrants have been intercepted crossing into Hungary, mostly from neighboring Serbia.

A record 2,500 arrived on Tuesday alone, including more than 500 children.

Once inside Hungary, a member of both the European Union and the passport-free Schengen zone, getting to countries like Germany and Sweden—the intended destination for most—is relatively easy.

“We want to go to Germany where we have relatives, that’s all,” says an Afghan teenager sitting together with four generations of family members at Nyugati (Western) Station across town.

The boy, who did not want to be named, arrived in Hungary on Monday as part of a group that was stopped for three days at the Macedonian border with Greece.

“If we had known the journey would be so bad, we would have stayed at home,” he said.

The migrants picked up at the border are registered as asylum-seekers and instructed to continue on by train via Budapest to one of the country’s official refugee camps.

But many opt to remain in the Budapest stations, while weighing up their options or waiting for other family members to arrive.

“We always urge people to move on quickly to the official camps in Hungary where they can legalize their status, but most are planning to make their move westward, often paying smugglers to take them to Austria or Germany,” a volunteer, who did not wish to be named, told AFP.

Right-wing Prime Minister Viktor Orban has taken a tough stance on immigration, making clear the new arrivals are not welcome.

A barrier of three rolls of barbed wire, running the entire length of Hungary’s 175-kilometer (110-mile) border with Serbia, is due to be completed by Monday, followed by a four-meter-high (13-foot) fence.

Meanwhile, Budapest mayor Istvan Tarlos vowed Wednesday to dismantle and relocate the station Transit Zones, saying they have turned the stations into camps.

By contrast with the authorities, the reaction of many Hungarians has been one of empathy.

A steady flow of people drop off food, clothes, medical supplies and even metro tickets at Migration Aid collection points.

But some passersby want to know why the group is not helping poor Hungarians instead, Zsuzsanna Zsohar, a 36-year-old volunteer says.

“I show them pictures of what has been happening in Aleppo (in Syria) for the last four years,” says Zsohar, a single mother of three. “Here is the Syrian war before their eyes.”

At Western Station, she and others stand waiting with supplies for migrants arriving off trains from the southern city of Szeged next to the Serbian border.

But with thousands now arriving in Hungary each day and most passing through Budapest, Zsohar says the volunteers cannot cope for much longer.

“The authorities must step in and take over properly as there is a risk now a humanitarian crisis develops.”