The latest report from the Makati City Action Center stated that on average, 41 percent of 7,210 senior citizens in five new barangays could not be found and were not registered voters as required, according to its newly appointed head, Arthur Cruto.

Cruto spoke at the resumption of the Senate blue ribbon subcommittee inquiry—the 25th since it started a year ago—on the alleged shenanigans committed by Vice President Jejomar Binay and his family that began when he was mayor of Makati.

Cruto also said the methodology of his personnel who conducted the audit was sound, as they had conducted extensive interviews to determine the existence of the senior citizens.

The action center said that each senior citizen—60 years old and above, a bona fide resident and a registered voter—was allocated a total of P11,750 in annual benefits. These include a cash gift of P3,000, birthday cake P300, special groceries for Christmas P1,500, free maintenance medicines P6,600 and free movies at P350.

Acting Makati Mayor Romulo Peña Jr. appointed Cruto, a former barangay official, to head the action center, a division in the city government, after Mayor Junjun Binay went on a six-month preventive suspension while the corruption charges against him are being investigated by the Office of the Ombudsman.

Cruto’s latest revelation was similar to his earlier findings that in Barangays Kasilawan and Pinagkaisahan in Makati, 40 to 52 percent of senior citizens could not be found or were not registered voters.

Ryan Barcelo, the former chief of the Makati Social Welfare Department (MSWD), however, sought to dispute Cruto’s claims. Barcelo said the BLU Card program was aboveboard and that the methodology of Cruto’s audit was unreliable and faulty because the personnel just simply asked about the whereabouts of the senior citizens.

Barcelo also said the database of 67,000 senior citizens was not padded. Those who want to join the program have to follow a strict enrollment process, including personally accomplishing the application forms and submitting other documents, he said.

“All senior citizens who enrolled for the BLU card program were alive when they applied and complied with the requirements. There is no way by which ghosts may be enrolled into the program,” he said.

There were instances where the family would not report the death of a senior citizen and continues to receive the benefits, but these are “isolated” incidents, he added.

But Cruto continued to question the registered number of BLU Card beneficiaries, which is more than 67,000.

He said that based on the data from the National Statistics Office, the national average of senior citizens in the country was 6.8 percent, or 6.26 million out of 92.1 million Filipinos in 2010.

But the number of Makati’s 67,000 senior citizens is about 12 percent of the city’s total population of some 529,000, or double the national average. 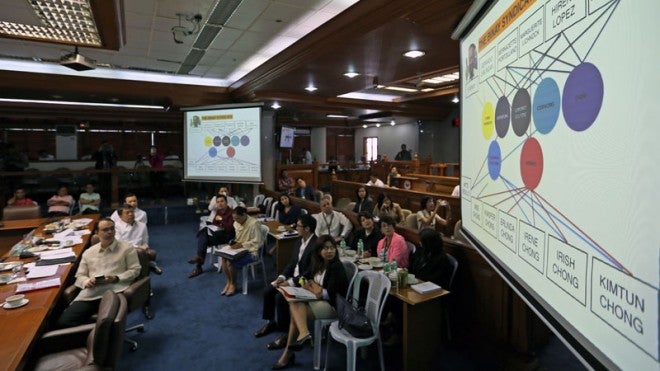 A TANGLED WEB Senators watch the Power Point presentation by lawyer Renato Bondal, showing the tangled web and layers of personalities that had reportedly fronted for former Makati mayor, now Vice President, Jejomar Binay, to hide the ownership of several companies that often landed lucrative contracts in the premier city. Bondal’s presentation detailed the interlocking directorate of several Binay-connected companies at the 24th Senate hearing on Wednesday on allegations of corruption against the Vice President and his family. RAFFY LERMA

Sen. Alan Peter Cayetano said that based on the census, there were only some 32,000 senior citizens in Makati.

If some 20,000 to 30,000 names were added to the list of senior citizens, the number was not small, Cayetano noted. “This is not a mistake; there is a syndicate.”

The addition of so many additional names on the list also amounts to hundreds of millions of pesos, and no single person could have done this or collected such a big amount, he added.

Sen. Antonio Trillanes IV noted Barcelo’s statements that senior citizens had to physically claim the benefits unless they were indisposed, and pointed to Cruto’s findings of supposedly nonexistent beneficiaries.

One of the findings was that 22 of 25 names who supposedly shared the same address could not be found there.

“If this would be proven, you would really be part of the syndicate here, Mr. Barcelo,” Trillanes said.

Barcelo said during the hearing that Makati had worked to validate the figures of the census on the number of senior citizens.

He also said he could not just arrive at the conclusion that the number of senior citizens in the city records was wrong, as there had been problems during the census, including the fact that accurate figures could not be collected because there were barangays where residents were not actively participating in the activity.

Trillanes said Barcelo received 15 checks made out to him from the congresswoman.

Barcelo said what he could recall was that he was bound as a special disbursement officer for the assistance to be given to residents. He was not aware if the money came from the PDAF.

He said that as a special disbursing officer, checks were made out to him since he was the one who dispenses the assistance.

Cayetano also said he thought it was irregular that the checks were made out to Barcelo and not to his office. Leila B. Salaverria/Philippine Daily Inquirer