Makati City Representative Abigail Binay was dragged into the ongoing Senate investigation on Wednesday after she allegedly issued at least 15 checks from her pork barrel funds to a former official of Makati City, who was in charge of the senior citizens’ program in the city.

It was Senator Antonio Trillanes IV who brought up the issue about the checks when that Ryan Barcelo, former officer in charge of the Makati Social Welfare Department (MSWD), faced the Senate blue ribbon subcommittee and denied that there were “ghost” senior citizens in Makati.

Barcelo was designated OIC of MSWD in October 2012 until he was replaced last July.

“Mahigpit po ang enrollment ng BLU card program, your honor (The enrollment for the BLU card follows strict measures, your honor). We require that the senior citizens to accomplish themselves ‘yung application form and submit the necessary documents,” he told the committee.

(The MSWD maintains that all the senior citizens who enrolled in the BLUE card program are alive when they complied with the requirements, so there’s no way by which ghosts may be enrolled into the program, your honor.)

Since the start of the implementation of the BLU card program in 2002 until on August 12, 2015, Barcelo said, the department issued a total of 88,071 BLU cards. Of these, he said, 18,135 have been rendered void “because either these senior citizens are already deceased or they were already confirmed to have transferred residence outside the City of Makati.”

“We have 67,429 active senior citizens in our record. In addition, 2,507 senior citizens who are marked ‘hold’ in our data base, ibig sabihin for further investigation po ‘yan either may na-received na report na ito’y lumipat na ng ibang ugar o hindi na nakita sa kanyang tahanan (that means they are for further investigation because we received a report that they either already transferred or that they can no longer be found in their addresses),” he said.

But Trillanes, who first exposed about the alleged fake senior citizens in the city, questioned the credibility of the resource person. 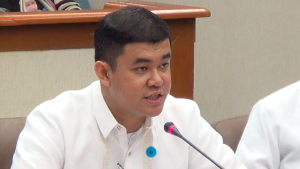 Ryan Barcelo, former officer in charge of the Makati Social Welfare Department, testifies in the Senate probe on the existence of alleged ghost senior citizens in Makati City. Photo by RYAN LEAGOGO/INQUIRER.net

“Wala? Are you sure? Are you certain?” asked Trillanes, to which the resource person answered, “I don’t recall.”

“I can recall, your honor, meron pong programa na medical or financial assistance dati ‘yung tanggapan ni Congresswoman Abi Binay at ang Social Welfare Department po ang nagiging paraang kung saan naibibigay itong assistance d’un sa mga nangangailangan, your honor (what I can recall is that Congresswoman Abi Binay and the Social Welfare department had a program for medical or financial assistance, and this was their way of helping the needy),” Bacelona added.

And as a special disbursing officer at that time, he said he was tasked to distribute the said assistance.

“I am not aware, your honor, if it was from PDAF or not basta merong assistance po na ganun sa mga nanganagilangan (but there was an assistance for the needy), your honor,” he added.

But Trillanes said that based on the evidence that he gathered, the checks were under Barcelo’s name.

(No matter how you go around it, it’s illegal. That’s called malversation because you liquidated the check given to you.)

Barcelo argued, however, that as disbursing officer of Makati at that time, the checks should have been really under his under his name.

(But this is from PDAF. From the DBM, it was given directly to you. Your excuse will only fly if it’s within the agency and the accounting procedures that allow that. Weren’t you given 15 checks?)

Barcelo maintained that he did not recall receiving the checks from Binay’s PDAF.

(You don’t recall receiving 15 checks? The amounts and dates are all here. You are where you are so I understand why you are trying to defend the Binays.) Maila Ager/IDL