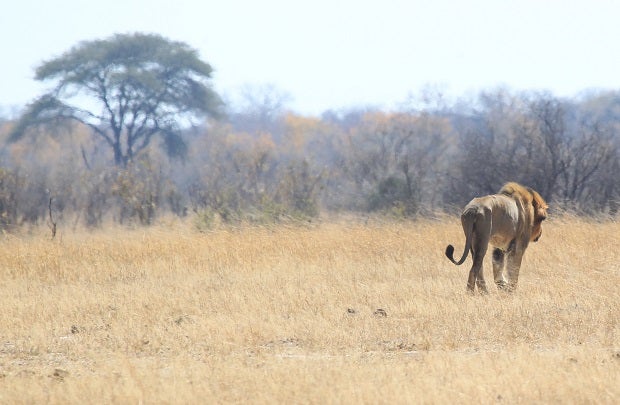 A lion named Tommy is seen Thursday, Aug. 6, 2015 in the Hwange National Park where Cecil the Lion was killed about 700 kilometers south west of Harare, Zimbabwe. Professional hunter Theodore Bronkhorst appeared in court Wednesday and was charged with failure to prevent the hunt by American dentist Walter James Palmer which resulted in the killing of Cecil the lion, had his case postponed to September 28, 2015. AP Photo

HARARE, Zimbabwe—A lion charged and killed a safari guide who was leading a group of tourists in the same national park in Zimbabwe that was the home of Cecil the lion who was controversially killed by an American bow hunter in July.

“One of the lions had cubs and they became hostile. Swales at first manage to scare the lions away but then the male lion later made a U-turn and attacked him,” Charamba told The Associated Press. None of the tourists was harmed, she said.

Swales was taking six tourists on a walking safari when he spotted fresh lion spoor and decided to track a pride of lions consisting of two females, two cubs and two males, according to the Zimbabwe National Parks and Wildlife Management Authority.

The lion, named Nxaha, attacked Swales, the parks authority said. The lion had a collar that allowed researchers to track his movements.

The killing of Cecil in July by dentist James Walter Palmer just outside Hwange park sparked outrage in the United States. Cecil was also collared for an Oxford University study.

Camp Hwange, the safari company that employed Swales, said the 40-year-old guide succumbed to the injuries on the same day he was attacked.

“He was tracking lions when a male lion unexpectedly charged,” said Camp Hwange in the statement issued Monday, adding that Swales was leading a photographic walking safari when he was attacked.

Camp Hwange’s Facebook page says it offers game drives and game walks where “game likely to be encountered include all of the cat family, wild dog, elephants and buffalo in huge numbers.”

Swales was an experienced professional with an excellent reputation in the safari community.

On the Camp Hwange Facebook page, where a statement of Swales’ death was posted, one user who went on a 10 kilometer (6 mile) walking safari led by Swales said: “After we left Hwange, our group talked about who we would want near if the end of the world ever came. Quinn was top of the list.”

Walking safaris in which tourists hike through African reserves teeming with dangerous big game are “highly popular and attacks by animals extremely infrequent,” said Trevor Lane, an official of the Safari Operators Association of Zimbabwe.

“I don’t recall any such incidents of an unprovoked attack around the Hwange area in the last 30 to 40 years,” said Lane. “This is no reason to stop walking safaris. It’s been going on for years and it is a great experience. It is very popular, highly sought after.”

In a separate incident in Zimbabwe, the parks authority said a man who sold curios to tourists was killed by an elephant in the resort town of Victoria Falls, about 100 kilometers (60 miles) from Hwange, also on Monday.