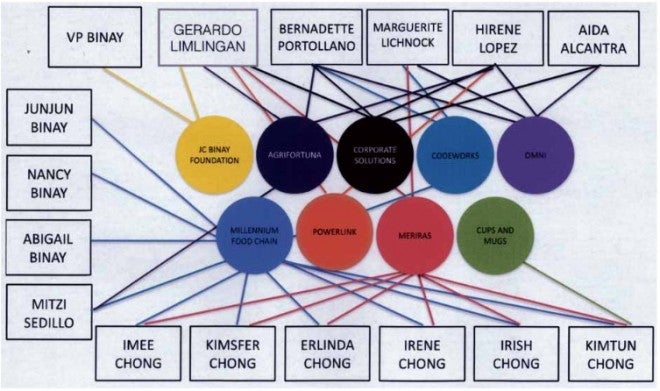 Nine companies whose directors and incorporators were interconnected and alleged to be dummies of the family of Vice President Jejomar Binay were awarded contracts worth hundreds of millions of pesos by the Makati City government, according to documents to be submitted to the Senate on Wednesday.

Renato Bondal, a lawyer, former Makati barangay (village) captain and ex-Binay ally, will present the documents at the resumption of the Senate blue ribbon subcommittee hearing Wednesday. He said the common denominator in the companies was Binay’s alleged bagman, Gerardo Limlingan, who has disappeared.

Contracts between Makati, represented by the city mayor, and company officials alleged to be fronts of Binay were worth more than P1 billion yearly. Copies of the contracts were made available to the Inquirer.

Corporate Solutions cornered a P350-million contract. It was headed by Limlingan as president and chair of the board.

Limlingan was the financial adviser of Binay and president of JC Binay Foundation, director and vice president of Agrifortuna, director and major stockholder of Meriras, incorporator of Regina capital, husband of Marguerite Lichnock and University of Makati business sector representative.

Edgardo Lacson was director and treasurer of JC Binay Foundation, consultant on trade and finance under the Office of the Vice President, a member of the board of trustees and public employers representative in Pag-Ibig and one of the titleholders of a lot in Hacienda Binay in Rosario, Batangas. He was also the treasurer of Powerlink company.

Hirene Lopez, wife of University of Makati president Tomas Lopez, was the president of Powerlink, treasurer and corporate secretary of Agrifortuna and treasurer of Omni Security.

Aida Alcantara, treasurer of Corporate Solutions is director and stockholder of Omni Security.

Bernadette Portollano, served as Limlingan’s longtime corporate secretary of three alleged dummy companies of Binay, Corporate Solutions, Codeworks and Omni Security. Portollano also served as administrator of Agrifortuna and, according to the Anti-Money Laundering Council (AMLC) report to the Court of Appeals, had joint bank accounts with Limlingan and Eduveges Baloloy, the longtime assistant of Binay.

Limlingan’s wife, Marguerite, was chair of Omni Security and an incorporator of Codeworks, a director of Meriras Realty.

Limlingan secretary Lily Crystal, Bondal said, was a longtime assistant of Limlingan who was also an incorporator of Codeworks. She served as the administrator of Agrifortuna, the first company founded by Binay and linked to Hacienda Binay. She had a joint bank account with Limlingan and Baloloy, according to the AMLC report.

Also an incorporator of Codeworks was Mitzi O. Sedillo, assistant treasurer and director of Agrifortuna, secretary of Limlingan. She also had a joint bank account with Limlingan as shown in the AMLC report. Sedillo, Bondal said, left for Canada last year when her name was mentioned in the subcommittee hearings on alleged overpriced Makati City buildings.

Imee, Kimsfer, Erlinda Irene, Irish and Kimtun Chong were connected to Binay as directors of Meriras Realty and Millennium Food Chains, where suspended Makati Mayor Junjun Binay, Rep. Abigail Binay and Sen. Maria Lourdes Binay were directors, according to the records of the Securities and Exchange Commission.

Also on Tuesday, the Vice President asked the Liberal Party to explain why it was insinuating in its commercials that he was the kampon ng kurakot or leader of the corrupt.

“What is your basis? How did I become corrupt?” Binay said in an interview with Radyo Inquirer.–With a report from Christine O. Avendano

What Went Before: Senate hearings vs Binays