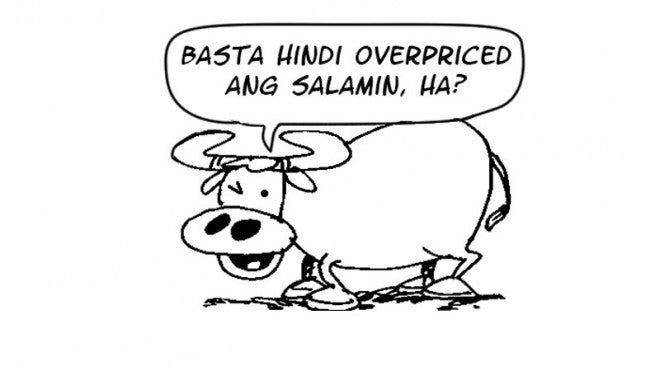 CEBU CITY, Philippines—Vice President Jejomar Binay needs to see his optometrist and President Aquino is willing to chip in so the opposition leader can see what the administration has done for Cebu.

In his message during a briefing on government projects in the province, Aquino said P22.848 billion had been allocated to Cebu since 2011 for major infrastructure projects, including roads, bridges, flood control, airport improvement, port improvement, irrigation and farm-to-market roads.

“Is this what they mean that we have left out and didn’t focus on Cebu?” Aquino said, referring to Binay’s attacks on his administration.

Aquino said he could give a copy of the briefer from the Department of Public Works and Highways (DPWH) to Binay so the Vice President could read it.

He said he was willing to chip in to get new glasses so Binay could read the briefer well.

“Problem is, those who pretend to be blind will not see anything even if we give them good glasses,” he said.

“If they want to live the world that he has created, that is his problem. But a reminder, there is free medical treatment,” he added.

Aquino’s rebuke was in answer to Binay’s claim that the national government had failed to provide Cebu its rightful share in national taxes and major infrastructure projects in the last five years.

Because of the lack of support from the national government, Binay said Cebu fell in the competitive index from No. 1 to No. 3 next to Davao del Sur and Misamis Oriental.

“The infrastructure projects in Cebu are lacking. And because of this, the streets have become narrow due to the traffic. It usually floods here. As a result, the businesses are affected (as well as) the livelihood of people in Cebu,” he said.

Binay slammed what he called selective treatment of the Liberal Party, saying that under the present administration, some provinces are luckier than others.

He cited the case of Batanes, the home province of Budget Secretary Florencio Abad, which received billions of pesos in national funds.

Aquino inspected the progress of the work on the Mactan Circumferential Road and Serging Osmeña Boulevard Port Corridor before going to the briefing.

During the news conference that followed, a reporter asked Aquino about the suggestion of Cavite Rep. Elpidio Barzaga that he run for Vice President with Interior Secretary Mar Roxas, the Liberal Party’s presidential candidate in next year’s national elections.

The President replied: “As you were asking me that, I could see my sisters, my nephews and nieces crying. Even Yolly (Yabes), my longtime house help, might suddenly retire.”

Barzaga suggested last week that Aquino run for Vice President should Sen. Grace Poe, whom the LP had been trying to get as a running mate for Roxas, refuse to come aboard.

He said a Mar-Noy team would be a “dream ticket.”

Malacañang shot down the idea, saying Aquino had already said he was looking forward to retirement from politics after he step down from office.–With a report from Jerry E. Esplanada