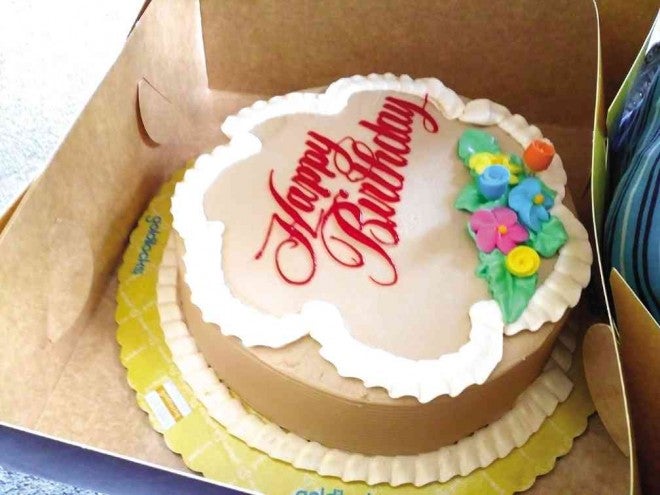 Makati City has a new supplier of birthday cakes for its senior citizens.

After a thorough review of the documents it submitted to the city government,  Goldilocks Bakeshop Inc.—the lone bidder —is set to get the P9.35-million contract for the cake-giving project.

In a text message to the Inquirer on Monday, Makati Mayor Romulo “Kid” Peña said he had already signed the notice to award the contract to the cake maker, along with the bids and awards committee (BAC) resolution declaring Goldilocks the winner.

The bakeshop was the only participant in the Aug. 10 bid conference to select a new birthday cake supplier for the city’s senior citizens. It offered a bid of P8.7 million for 31,187 cakes for senior citizens celebrating their birthdays from Aug. 15 to Dec. 15 this year, the duration of the contract.

The price given by Goldilocks for each round cake measuring 9 inches (diameter) by 2 inches (height) ranged from P266 to P285 depending on the three flavors indicated in the project requirements—chocolate chiffon, marble chiffon and mocha chiffon.

BAC vice chair and Makati City General Services Department head Violy Lazo said the bakeshop was chosen after a technical working group checked all the bid documents it submitted and found these to be in order.

The process was recently criticized by suspended Mayor Junjun Binay’s camp, which claimed that crucial details of the bid proposal made by Goldilocks were not disclosed.

According to Councilor Marie Alethea Casal-Uy, a known Binay ally, the information was necessary “for a fair comparison to be made between the new bid price and the former price….”

“They are obviously trying to mislead the media and the public by focusing their story on the bid price of Goldilocks at P285. At first glance, it is lower than the maximum bid amount. But they failed to compare the specifications as contained in the purchase requests,” she said.

Uy explained that last year, the city government sought bids for 70,000 birthday cakes measuring 9 by 4 inches. The cakes that were bid out on Aug. 10 were smaller—measuring only 9 by 2 inches—and also fewer, numbering just over 31,000, she noted.

Makati spokesman Gilbert de los Reyes, however, countered her claims by saying that they were also after the quality of the cakes, not just the size. He added that the bid conference was open to all members of media.

As for questions on why Goldilocks was the only one that showed up at the bidding when Peña earlier claimed that at least 300 cake makers had expressed interest in the project, BAC chair Danilo Villas said that all parties were given ample time to comply with the requirements.

However, only the winning bidder bought bid documents for the project costing P10,000, he added.

The previous supplier, Bakerite Inc., was also invited to join the bidding through a letter sent to its vice president for administration and operations Catherin Golfo. But  the company did not respond, Villas said.

The search for a new cake supplier began after Peña announced that he would bid out the contract to pave the way for “an honest and proper [selection] process.”

The acting mayor—who assumed office after Binay was ordered suspended by the Office of the Ombudsman over allegations that the Makati City Science High School building was overpriced—said that he wanted to continue the cake-giving project.

He wanted the selection process, however, to be done in a more transparent manner, adding that he also wanted the cakes to be “more affordable, tastier and branded.”

The cake-giving program started in 2003 during the term of then Mayor Jejomar Binay, who came under fire after lawyer Renato Bondal alleged in a Senate hearing last year that the baked goods distributed to the city’s senior citizens during their birthday were overpriced.

In his testimony before the Senate, former Makati Vice Mayor Ernesto Mercado  claimed that Sen. Nancy Binay had supplied the cakes, an allegation she vehemently denied.

A report by the Anti-Money Laundering Council, however, said that the Vice President’s children—Junjun and his sisters Nancy and Makati Rep. Abigail Binay—were founders of Millennium Food Chains Corp.—a suspected dummy company of the Binays—along with Erlinda Chong and Kim Tun Chong of Cups & Mugs.