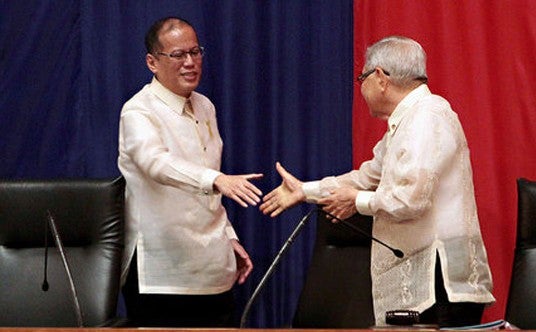 OZAMIZ CITY, Philippines—The proposed Freedom of Information (FOI) law is dead, and President Aquino and Speaker Feliciano Belmonte should share the blame for its fate.

Thus declared a group of advocates who have been pushing Congress for years to enact the measure that would allow greater access to public records and help reduce corruption in government.

“(W)ithout decisive support from the President and the leadership of the House of Representatives, the bill will not pass,” read the statement from the Right to Know, Right Now! Coalition which has been campaigning for the FOI bill for more than 15 years.

The statement was signed by 31 organizations and 12 individuals, among them, Nepomuceno Malaluan, the coalition’s co-convenor; Malou Mangahas of the Philippine Center for Investigative Journalism; Vincent Lazatin of Transparency and Accountability Network; Melinda Quintos de Jesus of the Center for Media Freedom and Responsibility; Most Rev. Rolando J. Tria Tirona of the Catholic Bishops Conference of the Philippines-National Secretariat for Social Action; Sixto Donato Macasaet of the Caucus of Development NGO Networks; Isagani Serrano of the Philippine Rural Reconstruction Movement; Leonor Briones of Social Watch Philippines; and Max de Mesa of the Philippine Alliance of Human Rights Advocates.

But the advocates declared that the fight for an FOI law lived on.

“It may take a different form, emphasis and strategy, but its essence will remain the same,” the group said.

The coalition said that President Aquino’s State of the Nation Address on July 27 could have been “a perfect opportunity for him to show a determined and sincere effort to pass the FOI…(b)ut for the sixth and final time, he chose not to do so.”

The group said that “(i)nstead, his spokespersons point to a single sentence on the FOI buried on page 38 of the 43-page Budget Message. If it can be included in the budget message, why can’t it be said openly for all to hear in the two-hour-long Sona?”

During the final session of the 14th Congress under then President Arroyo, the bill was close to being enacted into law with the ratification by the House of a bicameral conference committee report on the measure.

But then Speaker Prospero Nograles adjourned the session without the committee report being considered, amid the widespread presumption that the Arroyo administration, rocked by numerous corruption scandals, had shot down the measure.

Then, as now, the Senate has been a friendly forum for the FOI bill, with President Aquino, then a senator, vowing to make it a priority during his 2010 campaign.

The Right to Know, Right Now! Coalition noted that Aquino had made a similar promise “on at least two occasions before he took his oath as President.”

When the Aquino administration joined the Open Government Partnership (OGP) in 2011, the group said it was seen as boding well for a presidential push for an FOI law.

The OGP is a multilateral initiative led by the United States that aims to secure concrete commitments from governments to scale up transparency, accountability and public participation.

In the final months of President Aquino’s term, “the Philippines remains the only one of the eight founding members of the OGP that has not enacted an FOI Act,” the coalition said, adding that passing the FOI bill was widely seen as “an essential condition for the daang matuwid that Aquino has championed.

“For all his administration’s breast—beating about transparency, President Aquino has not mustered the political will to honor his campaign pact with the people to assure the passage of the FOI,” the group said.

The right to information is “a fundamental mechanism in the struggle for a rights-based governance with greater transparency and accountability, less corruption, broader and informed peoples’ participation and development outcomes that are sustainable and just,” the group said.

According to the coalition, Belmonte’s repeated promises on the FOI had not been matched by action.

“… The Speaker has not lifted a finger to give FOI a positive push” despite his vast powers in setting the legislative agenda and the priorities of every regular session of the House, the coalition said, adding that Majority Leader Neptali Gonzales was already laying the basis for all manner of excuses for the FOI’s non-passage.–Ryan D. Rosauro, Inquirer Mindanao