The Department of Social Welfare and Development (DSWD) will be taking custody of the infant who was shown being slapped repeatedly by his mother in a video that went viral on social media last week.

Social Welfare Secretary Dinky Soliman said the young mother may be suffering from postpartum depression and having difficulties adjusting to her new responsibilities.

The DSWD-National Capital Region office has sent social workers to check on the situation of the infant, who remained confined at a Pasay City hospital as of Sunday.

Last week, a Facebook user identified as Nil Aquino Sabangan uploaded the video that caught the mother slapping her young child who was crying incessantly as they lay on a hospital bed. The video has been viewed by 1.5 million Facebook users and shared more than 83,000 times as of Sunday. 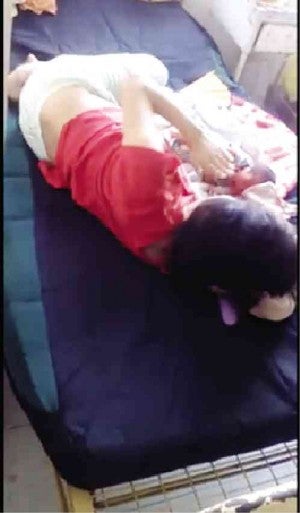 BIRTH PAINS OF A DARK KIND A videograb from a viral Facebook post shows a mother slapping her newborn child at Pasay City General Hospital. The disturbing scene has prompted an intervention from the Department of Social Welfare and Development.
From Nil Aquino Sabangan ‘s Facebook account

According to the post, the video was taken at the Pasay City General Hospital.

Soliman on Sunday said the baby had been moved to the hospital’s neonatal intensive care unit (ICU) while the mother was in a separate ward.

Other mothers at the public hospital have volunteered to breast-feed the baby, she noted.

“According to the resident doctors on duty, if the blood culture test of the baby turns out okay, he can be discharged within two to three days,” Soliman said.

The DSWD will be taking custody of the baby while the mother will remain in the hospital as she still has to undergo blood transfusion and psychiatric examination.

The baby will be taken to a DSWD-managed center while the agency searches for a relative who can take care of the infant.

Social workers and experts would be evaluating the mental and psychosocial capability of the mother to take care of her child, Soliman added.–Julie M. Aurelio

Read Next
Fewer ‘druggies’ in your area? Thank PNP’s ‘Lambat Sibat’
EDITORS' PICK
This new condo in the South will make you want to turn a new leaf
Legarda: Ending Violence Against Women, a cause for all
Sara Duterte calls for supporters’ unity after Go’s withdrawal from presidential race
CHR hopes inequalities exposed by COVID-19 pandemic are addressed
BOQ monitoring 64 travelers from ‘red-list’ countries amid Omicron
Smart offers wireless fiber-like speeds to Filipino homes with country’s first 5G Prepaid Home WiFi
MOST READ
DOH: Booster doses for fully vaxxed adults to start December 3
Another disqualification petition filed against Bongbong Marcos
Ex-DOT chief Ace Durano convicted of graft over 2009 project
Roque defends Bongbong Marcos: ‘He was only 15 years old in 1972’
Don't miss out on the latest news and information.