They left city jobs to farm roaches in their home village 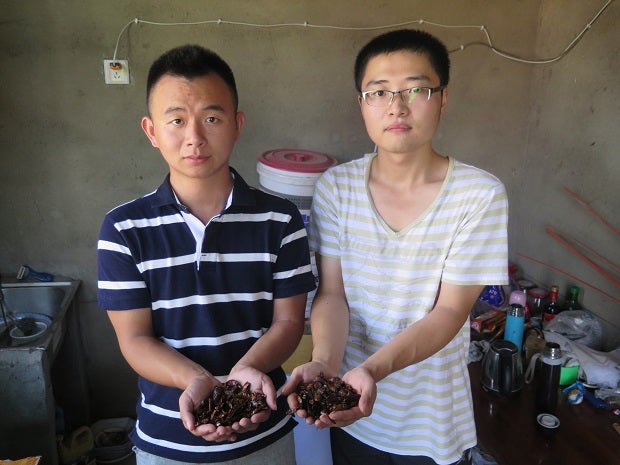 Qian Cheng (left) and Zheng Tianhang (right) with the dead cockroaches that they sell. The Straits Times/ANN

It’s the stuff of nightmares. A single light bulb hangs by a wire from the ceiling of a damp, dimly lit room with hundreds of thousands of cockroaches scurrying about.

Some 400,000, to be exact. They dart between cardboard and egg cartons strung together to provide the dark hiding places they prefer. It might be creepy to most people, but these six-legged critters being bred for their medicinal properties are rich pickings for 24-year-old Qian Cheng.

Last October, he moved from south-west Sichuan province’s capital Chengdu—where he worked in pharmaceutical sales at a Fortune 500 firm—to a tiny village two hours away to set up a cockroach farm with his childhood friend Zheng Tianhang, 23.

“We’ve always wanted to make something of ourselves and set up our own business. Ultimately, we chose to farm cockroaches because we believe their potential for medicinal development is very great,” Qian, a pharmaceutical management graduate from Sichuan University, told The Straits Times.

“Now, even though we’re tired and there are countless things to do daily, we’re very happy as we have our own freedom,” he said.

Cockroach farming is a fast-growing business as China looks for new and cheaper medicine for its ageing population. The cockroaches are used in traditional Chinese medicine as a cure for all types of stomach, heart and liver ailments. They are also used in treatment for burns and in facial masks.

Qian’s unique career choice as a roach farmer is part of a broader trend that has seen an increasing number of young graduates return to their rural home towns in a bid to be entrepreneurs and re-invigorate the countryside they grew up in.

Encouraged by government policies that urge entrepreneurship amid a glut of university graduates, many of them are bringing a modern twist to the traditional agricultural sector.

They buck a trend that has for years seen millions migrate from villages to cities instead in search of a better life.

While countrywide statistics about the number of such graduate returnees are unavailable, local Chinese media has increasingly reported on the trend.

In Le’an county in south-east Jiangxi province, for example, some 300 graduates were said to have returned to start businesses after the local government rolled out supportive policies on financing and tax. In Yuexi county in eastern Anhui province, 30 were reported to have done the same.

Unlike when the late Chinese leader Mao Zedong forced millions of young people to leave their families for the countryside in a bid to transform them into ideologically pure, proletarian laborers, this migration is more “rational,” experts say.

With the development of rural areas lagging behind that of wealthy cities, China believes graduates can help by connecting villages to the markets and networks driving the country’s economy, they add. The downside of city living, such as high property prices, pollution and getting a migrant status, has also spurred some village graduates to return home.

In February last year, for instance, the Agriculture Ministry released guidelines asking local governments to implement policies that could encourage graduates to establish farms. The coordinated development of cities and villages has also been stressed many times.

Already, Qian is one such beneficiary, clinching a 50,000-yuan (S$11,000) entrepreneurial grant from the local authorities in May, which helped cover part of the initial capital of 100,000 yuan needed to set up the 30 square meter farm.

He said that returning to their home town in Shifang county was an easy decision because he and Zheng had a good network there. They found a location for their farm, for instance, after a friend told them about an unoccupied house that could be used.

But they also had to convince their parents that turning their backs on stable jobs was not a mistake.

“As we are both an only child, our parents are naturally worried about us and, while they don’t outrightly object to our choices, they’re concerned about the risks and still are today,” Qian said.

“There are also fewer talented people in villages and so the chances of learning new things and coming into contact with new ideas have decreased. That has been the main difference since moving back home.”

Although their farm is considered small—the largest cockroach farm in China is said to house 22 million roaches—Qian has plans to raise capacity to better meet the yearly demand of 2,000 tons of cockroaches in China. They are forecasting yearly production of 100 kg for now.

“We also hope to export these cockroaches one day. We want to push traditional Chinese medicine to the world and to complement areas that Western medicine cannot reach,” Qian said.

For Wu Songqing, 30, a finance graduate who moved back to his village of Guanhe in central Anhui province’s Yuexi county to grow mu’er—an edible black fungus—it was wanting to make a difference that drew him home.

“Cities are filled with graduates, but in villages it’s harder to find talent. I returned because I could use the skills and knowledge I learnt to make a bigger difference in villages, maximizing my personal value and my value to society,” he told The Straits Times.

“Having grown up in a village, I also felt an affinity with agriculture. Moreover, I wanted to start a business as I enjoy a good challenge,” added Wu, who had worked at a state-owned firm as a marketing executive in Jiangsu province.

While he has left behind the comforts of city life, he said the improvements in connectivity and technology that have narrowed the differences between rural and city living helped sway his decision to move back to the small village of just 2,000 people.

“With a car, whether I want to travel, eat or experience life in big cities like Anhui’s capital Hefei or Wuhan in Hubei province, I can get there within three hours. It’s not much difference,” he said.

Wu’s entrepreneurial story began in 2013 when he realized—on a visit home—that villagers who were breeding silkworms in mulberry trees were discarding their branches. But these were ideal for growing high-quality mu’er.

Excited about his discovery, he traveled to Zhejiang province to learn how to grow the fungus before taking the plunge and acquiring 1.3 hectares of land to start his farm. He now produces more than 10 tons of mu’er yearly on 3.3 ha of land. While he has already made returns on his initial investment, he is reinvesting profits to expand the business. “Business has been very good. Demand for our mu’er far outstrips supply and we’re thinking about expanding the business and growing mushrooms too.”

Renmin University labor expert Liu Erduo told The Straits Times that “the trend (of graduates leaving cities) is positive for China as it helps to spread the talent pool more evenly.”

“But while this trend is likely to continue, it has yet to become a huge movement,” he said. “Graduates typically still prefer cities, but inconveniences such as high housing prices force them to look elsewhere.”

Still, interesting new trends are already being observed. The boom in China’s e-commerce sector and the development of transport and logistics networks allow rural entrepreneurs to introduce a modern take to agriculture by weaving the Internet into their business plans.

Wu, for instance, has opened a shop on Taobao, China’s version of eBay, to further increase the sales of his produce and to raise his firm’s profile.

He also hopes to spur the village’s economy by raising incomes. Already, many villagers are hired as helpers during harvest season.

“It’s our second year of business and we’ve figured out most of the technical and market-related aspects,” Wu said.

“The next step is to share the fruits with the village and the county, possibly teaching them how to grow the mu’er and then buying it from them.”

As for Qian, with plans to eventually raise cockroach production to between five and six tons a year, he is also keen to convince more people that cockroaches are more of a dream than a nightmare.

“We are still a young business but, eventually, as we expand, we hope to rope in more villagers to seek this fortune with us.”

Read Next
North Korea says ready for ‘all-out war’
EDITORS' PICK
97% of COVID-19 beds at PGH currently occupied
Gear up and get ready to play with Yamaha Mio Gear
Acer starts the year off strong with the Aspire Vero National Geographic Edition
Japan brings back virus restrictions over Omicron surge
Over 3 Million worth of prizes to be won at Smart Padala’s SENDali Manalo Promo!
Uproar over no vax, no ride policy: Maybe it’s time for gov’t to say sorry—Bello
MOST READ
1Sambayan names 7 aspirants in its 2022 Senate lineup
Emma Stone calls Andrew Garfield a ‘jerk’ after he ‘lied’ about his ‘Spider-Man: No Way Home’ appearance
Guevarra to Acosta: Obey rules on unvaccinated
PH to import 60,000 tons of fish to cover shortage
Don't miss out on the latest news and information.