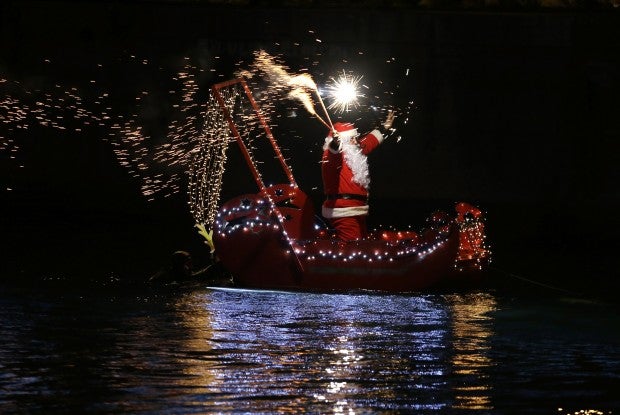 A man dressed as Santa Claus lights flares as he stands on a boat in Imperia, near Genoa, Italy, Wednesday, Dec. 24, 2014. AP

HELSINKI, Finland—Santa Claus is broke and has filed for bankruptcy in Finland, or at least a popular tourist attraction on the Arctic Circle has done so.

According to court documents on Thursday, Dianordia, a company which fulfils the dream of children and their families from all over the world to meet Santa Claus in person, needs a bit of Christmas cheer.

But the head of the company Jarmo Kariniemi says he is not ready to give up. He still has a week to keep Santa on the job.

“We will take care of it. We have already collected half of the sum,” Kariniemi told AFP.

Every year, around 300,000 tourists of 100 different nationalities visit Santa’s Office—which claims to be the official one—in Rovaniemi on the Arctic Circle in Finnish Lapland.

Santa’s Office is part of an amusement park called Santa Claus Village hosting several companies. The Village and the other companies are not affected by the court’s proceedings.

The head of the Rovaniemi Regional Development Agency, Juha Seppala, said his organization would make sure Santa is there in the future.

“There is no way the village would be left without Santa Claus. The activities will continue in one way or another,” he told AFP.

Kariniemi said his company’s financial difficulties were due to “the turbulence in the world” resulting in a drop in the number of tourists visiting the region.

“First, there were fewer tourists coming from Greece, then from Spain, Italy and Portugal, and eventually from Russia,” he explained, referring to the economic downturn in those countries.

In January, Finnish Border Guards reported a 33-percent drop from December 2013 to December 2014 in border crossings between Finland and its eastern neighbor Russia, which sends the most tourists to Finland, and has been affected by the fall of the ruble.