With Duterte on his mind, Alan Cayetano says no thanks if LP offers VP | Inquirer News

With Duterte on his mind, Alan Cayetano says no thanks if LP offers VP 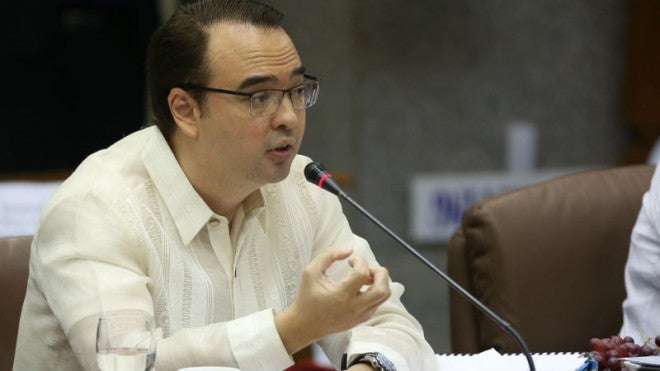 Sen. Alan Peter Cayetano on Thursday said it would do no good for him to speak with the Liberal Party (LP) at this point about running with its standard-bearer, Interior Secretary Mar Roxas, since the party was focused on its pursuit of Sen. Grace Poe.

Not that he is uninterested but that his party, the Nacionalista Party (NP), is still studying its options for 2016 and those may include his running with Davao City Mayor Rodrigo Duterte, whose presidential candidacy he virtually endorsed on Monday.

But he said he did not think the LP would “two-time,” or would look for a sideline, while wooing Poe to team up with Roxas.

“As far as I know, they’re still focused on Senator Poe. So maybe they should conclude their talks with [her] before we [talk]. In the meantime, we’re exploring possibilities,” Cayetano told reporters at the Senate.

He said what was important to him in seeking a political partner was program and vision. He said his partner should not treat him as just a “trophy.”

“It could be exciting, that’s why I’m personally exploring their personalities,” he said.

Looking at them all

Cayetano said he had known Roxas since 1998. He said he had also talked to Duterte three or four times, and found the issues raised by Duterte exciting.

“I’m looking at where I’ll be most effective and where the NP will find a home,” he said.

Cayetano was in Davao City on Monday on Duterte’s invitation for the opening of this year’s Kadayawan festival.

In a talk with Davao reporters, Cayetano said Duterte had an edge over other presidential aspirants because of a clamor from the people for the mayor to run for President.

“Duterte’s case is unique because there’s a genuine clamor for him to run,” Cayetano said, comparing Duterte to Poe and Roxas whose popularity was reflected only on the voter preference polls.

Cayetano said, however, that he did not know whom Duterte would pick as running mate if the mayor would run for President.

But Duterte’s political handlers spoke about a possible alliance between the mayor’s PDP-Laban party and the NP, indicating Cayetano would likely be chosen as Duterte’s running mate.

Lito Banayo, Duterte’s political campaigner, said Cayetano’s virtual endorsement of a Duterte run for President had opened up the possibility of a PDP-Laban-NP alliance.

In Manila on Thursday, Cayetano said he was not sensitive about being considered for second place, as being a second choice in politics was not the same as being second fiddle in a relationship.

There are always circumstances surrounding the choosing of a political partner, and it does not always mean that the first choice is the best for the job, he said.

Cayetano also said it was only natural for parties to gravitate first to those who are topping the polls.

Cayetano’s virtual endorsement of Duterte followed the one made by former Senate President Aquilino Pimentel Jr., the chair emeritus of the PDP-Laban.

Pimentel earlier announced the PDP-Laban’s support for Duterte if he would run for President.

“I cannot see anyone who could go against Duterte inside the party,” Pimentel told a local radio station here.

What’s important is to look for the “best choice,” he added.

As for the possibility that he and fellow NP member Sen. Antonio Trillanes IV may become rivals for the presidency, Cayetano said he was hoping that they would not compete for the same post.

But if it would come to that, he said his relationship with Trillanes was more important than the position. They would remain friends and allies in the fight against corruption, he said.

“I know people will attempt to drive a wedge [between us], but we have to find the wisdom not to allow that,” he said.

Trillanes, who announced early on that he would run for Vice President with or without a running mate and with or without the NP’s support, said everybody had the right to offer himself as an alternative in 2016, and it’s up to the people to decide who was deserving.

Cayetano also said he was still focused on the presidency, but he was not closing his door to the vice presidency.

On Thursday, Trillanes said he and Roxas met by chance on Wednesday night and spoke about their plans for 2016.

“We wished each other well,” Trillanes told reporters in an interview.

He said he told Roxas about the decision of his Magdalo part-list group to support Poe if she would run for President. Their discussion was a good one, he said.

“I never had anything against Secretary Mar. As I said, I believe he’s a good person. But our paths would diverge [in] 2016,” he said.

He said he also told Roxas about the process followed by Magdalo in choosing whom to support. It has more than 600 chapter leaders, and majority of them chose Poe, he said.

“That was what came out. We don’t impose,” he said.

Asked if he received an offer to be Roxas’ running mate, Trillanes said “relevant people in the Liberal Party” told him that he was one of the alternatives. He did not hear it from Roxas himself, he said.–Leila B. Salaverria with Germelina Lacorte, Inquirer Mindanao