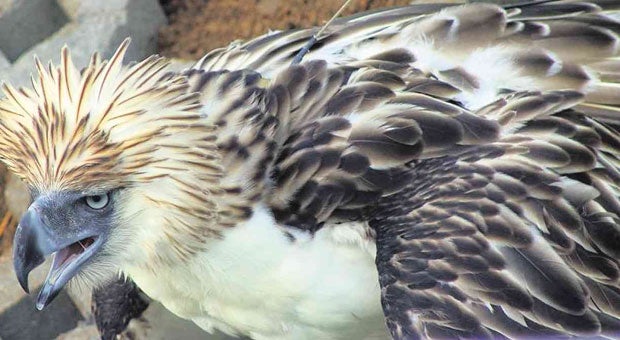 NATIONAL TREASURE Pamana, a 3-year-old juvenile Philippine Eagle, died from a bullet wound on the chest two months after she was released into the wild on June 12. IAN GARCIA/CONTRIBUTOR

A P200,000 reward has been put up for any information leading to the arrest of those responsible for killing a Philippine eagle named Pamana.

Of the amount, P100,000 was from the Department of Environment and Natural Resources (DENR), and P50,000 each from Davao Oriental Gov. Corazon Malanyaon and television personality Kim Atienza.

Environment Secretary Ramon Paje expressed grief over the bird’s death, describing it as a “setback to government efforts to protect the critically endangered raptor.”

“We are deeply saddened by the tragic death of Pamana. Those responsible for this barbaric act must be arrested and punished for committing this environmental crime,” Paje said in a statement.

The Philippine eagle has been the national bird since July 1995.

He added that the eagle’s death would not prevent the government through the Philippine Eagle Foundation (PEF) to pursue its captive breeding program to boost the species’ population.

Sen. Loren Legarda said it was ironic that the bird whose name symbolized our unique heritage was the one killed.

“In this light, I urge all government agencies concerned and the citizens in the area to work together to seriously address the killing of Pamana by conducting an immediate investigation not only to give justice to Pamana but also to highlight the need to preserve our heritage,” Legarda said in a statement.

The DENR regional office in Davao Oriental province, the Protected Area Management Board and the PEF are now conducting a full investigation.

“We are distressed that, despite intensified awareness campaigns by various stakeholders, some people still have a blatant disregard for our natural heritage,” Paje said.

A puncture and metal fragment on her right breast indicated she had died of a gunshot wound.

In a necropsy report, PEF veterinarian Dr. Ana Lascano said the bird was already in an advanced state of decomposition when its carcass was found a kilometer away from where she was released in San Isidro, Davao Oriental.

The estimated date of death was Aug. 10, when fieldworkers observed that a transmitter attached to her back had stopped sending radio signals.

The Philippine eagle is considered critically endangered by the International Union for Conservation of Nature. There are an estimated 400 pairs remaining in the wild, more than half of them in Mindanao.

Paje slammed the killing as he called on local residents and law-enforcement units to assist regional environment officials in hunting down the perpetrator.

He stressed that the Philippine eagle was protected under Republic Act No. 9147, or the Wildlife Resources Conservation and Protection Act.

Those found guilty of killing wildlife species face six to 12 years’ imprisonment, with a fine ranging from P100,000 to P1 million.

Illegal hunting within the protected area is also punishable by a six-year jail term and P500,000 fine.

Pamana was released into the wild only on June 12 after she was rehabilitated for a gunshot wound three years ago.

Police sources said they were looking into the possibility that Pamana flew to a populated area in the village of La Union and was shot there.

But Dennis Salvador, PEF executive director, said based on the data fed by the GPS and radio transmitter that was attached to the eagle, Pamana never left the forested area of Mt. Hamiguitan.

“The governor is very much willing to give P50,000 reward for any credible, reliable, very good information about Pamana’s killing,” he said.

Salvador said despite Pamana’s killing, the PEF would still release Philippine eagles into the wild.

“Yes, because that is where they belong,” Salvador told the Inquirer.

He said the only reason conservationists were keeping the eagles at the Philippine Eagle Center in Davao City was because the birds were hatched and bred in captivity or were being rehabilitated.

“Where else would they go?” Salvador asked.

The PEF team on Mt. Hamiguitan said that weeks before Pamana was killed, she was seen interacting with two other eagles.

“We were very excited. The team saw a juvenile and an adult eagle interacting with Pamana,” Salvador said.

Salvador said after hearing the news about Pamana’s death, the PEF team first thought she was attacked by the other eagles.

But based on the necropsy done on the eagle’s remains, the PEF was sure Pamana was killed, not by another eagle, but by a person using a gun.

Salvador said the PEF was very hopeful the perpetrator or perpetrators will be arrested.

“Hopeful, still hopeful … the eyes of the world are on them,” he said.

Reacting to questions why it took the PEF four days to confirm Pamana’s death, Salvador said: “First of all, we looked for the bird. We were operating in a very difficult and different terrain.”

He added that the PEF monitoring team only had one transmitter with them at the time and it was really difficult to triangulate.

“In addition to that, we cannot tell what the immediate cause of death was because we have to transport the bird back to the center here in Davao to do a necropsy report. On Aug. 16, we found Pamana dead. On the 17th, we transported her to the center. On the 18th we had team debriefing. We had to be absolutely sure of our facts,” Salvador said.

It was not the first time a Philippine eagle was shot dead. On Aug. 14, 2004, a decomposing body of a female Philippine eagle being monitored by the DENR was found in Mt. Apo in Davao City.

The bird bore a gunshot wound and a crack at its keel bone.

In July 2008, Kagsabua, a 3-year-old male Philippine eagle, was killed and cooked by a tribal farmer in Impasug-ong, Bukidnon province.

“Kagsabua,” an indigenous word for unity, was shot with an air gun while he was perched on a tree. The eagle was released back to the wild in March 2008.

In October 2013, Minalwang was found dead with gunshot wounds in the forest of Mt. Lumot in Misamis Oriental province, barely two months after it was freed.