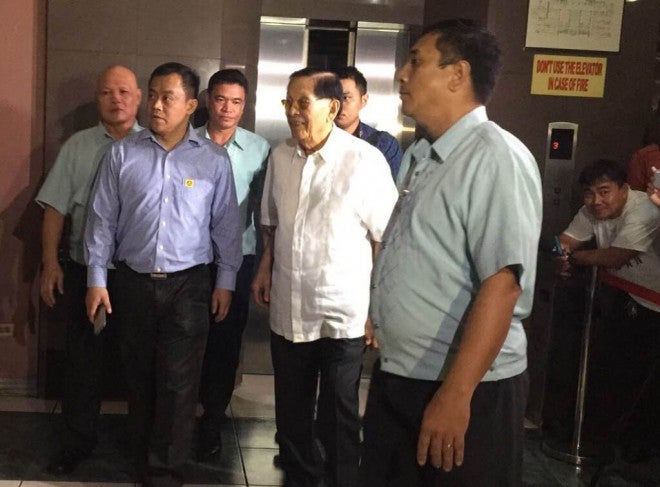 Senator Juan Ponce Enrile wears a smile at the Sandiganbayan where he posted bail for his provisional release. PHOTO/Marc Cayabyab

Associate Justice Marvic Leonen slammed the Supreme Court’s majority decision allowing Sen. Juan Ponce Enrile to post bail and secure temporary release from a year’s detention while the plunder charges against him are being tried, saying it cast doubt on its impartiality and set a dangerous precedent.

In a dissenting opinion, Leonen said the bail grant “by the majority is a special accommodation” for Enrile. “It is based on a ground—humanitarian— never before raised before the Sandiganbayan or in the pleadings filed before this court.”

Leonen said the decision was “especially tailored” for the 91-year-old Senate minority leader, who surrendered in July last year after he was indicted for allegedly pocketing P173 million in kickbacks for allowing the diversion of his pork barrel allocation to ghost projects and fake foundations.

“Not only is this contrary to the rule of law, it also undermines the legitimacy and the stability of our entire judicial system,” Leonen wrote.

“With his solid reputation in both his public and his private lives, his long years of public service, and history’s judgment of him being at stake, he should be granted bail,” said Associate Justice Lucas Bersamin’s ponencia.

“The currently fragile state of Enrile’s health presents another compelling justification for his admission to bail, but which the Sandiganabayan did not recognize,” said the high court in a 17-page ruling.

“In our view, his social and political standing and his having immediately surrendered … indicated that the risk of his flight or escape from this jurisdiction is highly unlikely,” they said.

The court’s decision, along with the dissenting opinion, was released on Thursday—two days after the court spokesperson read a one-paragraph news brief stating simply that the magistrates had allowed Enrile to post bail.

The majority decision said that the Sandiganbayan committed grave abuse of discretion in denying Enrile’s motion for bail. It said that the principal purpose of bail is to guarantee the appearance of the accused in the trial.

Does not exist in law

In his 29-page dissent, Leonen warned that the decision “will usher in an era of truly selective justice not based on clear legal provisions, but one that is unpredictable, partial and solely grounded on the presence or absence of human compassion.”

Leonen, along with Chief Justice Maria Lourdes Sereno and Associate Justices Antonio Carpio and Estela Perlas Bernabe, lost out to the majority vote by eight of their peers on Enrile’s bail plea in an en banc session on Tuesday.

Insisting that Enrile should remain detained, Leonen cited how other detainees old and ill but with less in life languished in the country’s cramped jails. “For them, there are no special privileges. The application of the law to them is often brute, banal and canonical,” Leonen said.

Leonen pointed out that humanitarian consideration was not even among Enrile’s arguments in seeking his release. It does not even exist in law, he said.

“Bail for humanitarian considerations is neither presently provided in our Rules of Court nor found in any statute or provision of the Constitution,” he said, adding that the conditions for bail under court rules were “so canonical,” hence clear-cut.

He said it was only right for the antigraft court to deny Enrile bail, which the senator assailed in the Supreme Court.

“The Sandiganbayan should not be faulted for not shedding their neutrality and impartiality. It is not the duty of an impartial court to find what it deems a better argument for the accused at the expense of the prosecution and the people they represent,” Leonen said.

Leonen also revealed that the final version signed by the court and released to the public on Thursday was different from the version that the en banc had deliberated and voted on Tuesday.

In his first version, Bersamin, the magistrate assigned to write the court’s opinion, invoked bail as a matter of right and the two mitigating circumstances that Enrile cited in his plea—his age and voluntary surrender.

Per Leonen’s account, Bersamin “proposed the idea of dropping all discussion on legal points” on the bail plea and instead focusing on humanitarian grounds during en banc deliberations on Aug. 11, thus revising his first draft.

The revision, which “centered on granting bail on the basis of [Enrile’s] medical condition,” was circulated to justices on Aug. 14. This prompted Leonen to write a letter to his colleagues, seeking further deliberations as several issues “need to be threshed out thoroughly.”

But during Tuesday’s voting, Bersamin “did not agree to wait for a more extensive written reflection” on points Leonen raised in his letter. Instead, he pressed for a vote and told his colleagues that he was abandoning his revised draft this time, reverting instead to his first draft, according to Leonen.

“Insisting on a vote, he thus declared that he was abandoning the Aug. 14, 2015, circulated draft centering on release on bail on humanitarian grounds for his earlier version premised on the idea that bail was a matter of right based on judicial notice and the judicial declaration of the existence of two mitigating circumstances,” the justice said.

It was thus the first version that the court voted on at 11 a.m. on Aug. 18: Eight favored, four dissented, one inhibited, while two had no votes as they were on leave.

But Bersamin circulated a final copy at 3 p.m. of the same day as magistrates heard the Torre de Manila case.

This copy, said Leonen, “was not the version voted upon during the morning’s deliberation. Instead, it was “substantially” the Aug. 14 draft, which Bersamin had earlier said he was abandoning.

“The copy offered for signature was substantially the Aug. 14, 2015, circulated version granting bail on humanitarian grounds,” Leonen said, citing this as the cause for the delay of the release of the vote details, the full decision and his dissent.

“Ordinarily, the drafts of the dissents would have been available to all members of the court at the time the case was voted upon. But because the final version for signing was not the version voted upon, this member had to substantially revise his dissent,” Leonen said.

“Nowhere in the rules of procedure do we allow the grant of bail based on judicial notice of a doctor’s certification. In doing so, we effectively suspend our rules on evidence by doing away with cross-examination and authentication of Dr. Jose Gonzales’ findings on petitioner’s health,” said Leonen.

Gonzales, director of the Philippine General Hospital, had testified about Enrile’s condition at the Sandiganbayan.

Leonen noted how Enrile’s friends, family and colleagues in the Senate had readily spoken about the senator’s possible immediate return to the legislature upon release, contrary to claims of his frail health.

“The special grant of bail due to medical conditions is unique, extraordinary and exceptional. To allow petitioner to go about his other duties would be to blatantly flaunt a violation of other provisions of the Constitution and our rules,” Leonen said.

Enrile and his former chief of staff, Gigi Reyes, are accused of pocketing P173 million in exchange for diverting the Senator’s Priority Development Assistance Fund to bogus nongovernment organizations (NGOs), a scheme allegedly the brainchild of detained businesswoman Janet Lim-Napoles.

“Indeed, denying him bail despite imperiling his health and life would not serve the true objective of preventive incarceration during the trial,” it said.

The court likewise cited the Philippines’ commitment under the Universal Declaration of Human Rights.

“This national commitment to uphold the fundamental human rights as well as value the worth and dignity of every person has authorized the grant of bail not only to those charged in criminal proceedings, but also to extraditees upon a clear and convincing showing: (1) that the detainee will not be a flight risk or a danger to the community; and (2) that there exist special, humanitarian and compelling circumstances.

The court said Enrile “has demonstrated his utter respect for the legal processes of this country.” It cited how the court granted Enrile’s petition for bail while on trial for rebellion, murder and multiple frustrated murder after the December 1989 coup, “because he was not seen as a flight risk.” Tarra Quismundo