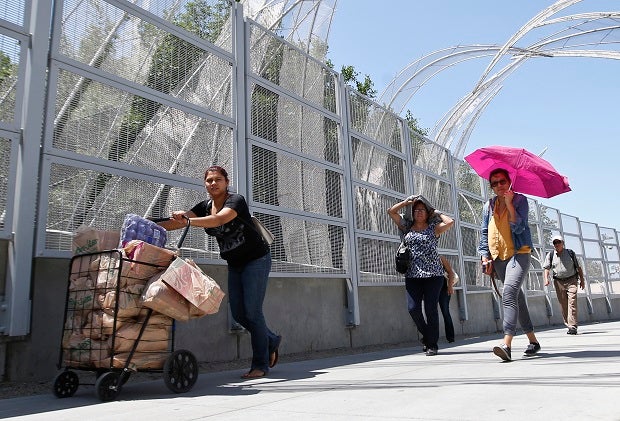 In this Aug. 18, 2015 photo, a woman pushes a cart full of goods as she and others head toward the entrance to the Mexico border crossing in San Ysidro, Calif. Starting late Wednesday, Aug. 19, pedestrians going to Tijuana from San Diego at the San Ysidro crossing must choose between a line for Mexicans who get waved through, and a line for foreigners. Foreigners must show a passport, fill out a form and – if staying more than a week – pay for a six-month permit. AP

SAN DIEGO, California — Walking into Mexico at the nation’s busiest border crossing with the United States is no longer an uninterrupted stroll for foreigners.

Starting late Wednesday, pedestrians going to Tijuana from San Diego at the San Ysidro crossing must choose between a line for Mexicans who get waved through, and a line for foreigners who must show a passport, fill out a form and — if staying more than a week — pay 322 pesos, or roughly $20, for a six-month permit.

About a dozen foreigners stood in line Wednesday night, directed by English-speaking agents to six inspection booths where they got passports stamped. It took about 10 minutes from start to finish.

Travelers have long followed similar protocol at Mexican airports, but the new border procedure marks a big change at land crossings that weren’t designed to question everyone. Pedestrians and motorists have generally entered Mexico unencumbered along the 1,954-mile border with the United States.

“This is about putting our house in order,” said Rodulfo Figueroa, Mexico’s top immigration official in Baja California state, which includes Tijuana.

The changes, which have been in the works for years, come as Donald Trump has surged to the top of the Republican field in the US presidential race. He has insisted that Mexico sends criminals to the US and pledges to build a border wall at Mexico’s expense.

For Mexico, it is a step toward closing an escape route for American criminals who disappear in Mexico. Border inspectors will tap into international criminal databases. Motorists will see no change, and if lines get too long, officials will also wave pedestrians through.

More than 120 Americans expelled from Mexico this year while living in Baja California had arrest warrants in the US, according to Figueroa, delegate of the National Migration Institute. Some ordered to leave last year were on the FBI’s most-wanted list.

But authorities say benefits extend beyond stopping unwanted visitors. A recent hurricane stranded twice as many Americans in Cabo San Lucas than US authorities thought were there, Figueroa said, and registering as a foreigner would have made it easier to identify those who needed help.

Figueroa said Mexico can initially process about 1,000 foreigners daily, up from about 50 currently.

“If the line becomes clogged up, we will just let everybody through,” Figueroa said. “If we can’t check everybody, we won’t.”

Figueroa said San Ysidro is believed to be the first US land crossing to have a separate line for foreigners to show passports and that it will serve as a model for others as they are upgraded. Aurora Vega, a spokeswoman for the National Migration Institute, referred questions to other departments. Officials at the Foreign Relations Department and Mexican Embassy in Washington had no immediate comment.

About 25,000 pedestrians (and 50,000 motorists) cross daily at San Ysidro to work, shop and play but it is unclear how many are foreigners in Mexico. US Customs and Border Protection says about one-third entering San Diego are US citizens, one-third are US legal residents and the rest are from other countries, largely Mexico. An unknown number have dual citizenship or residency in the US and Mexico.

Both countries have long wrestled with logistical hurdles of stopping people going to Mexico by land. The US occasionally stops motorists and pedestrians as they leave — mainly to check for guns and cash — but it doesn’t have a system to record exits like at airports, seen by many as a significant shortcoming in border security.

Roberto Arteaga, who has made tacos, shined shoes and sold tickets for private bus and van rides in Southern California during 28 years as a street vendor near the border crossing, says requiring passports and imposing a fee for longer stays sends the wrong message.

“We should be welcoming,” he said during a lull in business Tuesday. “This will hurt Tijuana’s economy.”

Other crossers said the move was overdue.

“Anything to keep the country safer is much better for everyone,” Cynthia Diaz of Oceanside, near San Diego, said as she stood in line to return to the US with her niece, who visited Tijuana for a root canal. “It’s safer for us on the other side too.”