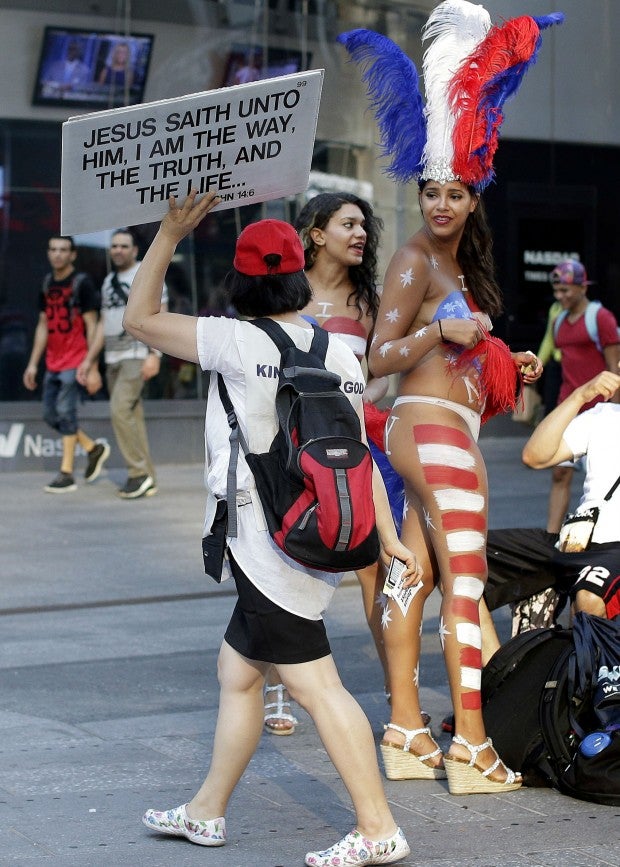 In this photo taken on Tuesday, July 28, 2015, a proselytizer walks by two women clad in thongs and body paint in Times Square, in New York. AP Photo

NEW YORK, United States—Naked but for a thong and body paint to spare their blushes, topless women in New York’s Times Square are courting the wrong crowd this summer.

Their ample bosoms painted in patriotic stars and stripes, N and Y daubed on each butt cheek and sprouting feather headdresses, the curvaceous beauties call themselves street entertainers.

Strutting their stuff in high heels, the painted ladies cuddle up to tourists for souvenir photos, in exchange for a big fat tip.

Yet snootiness about decency and accusations of illegal, aggressive panhandling have made them the butt of a tabloid campaign and New York Governor Andrew Cuomo says they must go.

“I believe it’s illegal, I believe we can enforce the law and clean it up and we will,” the Democrat told NY1 television, determined to protect the city’s sanitized tourist reputation.

“It is a serious issue,” he pleaded. “This is starting to remind me of the bad old Times Square.”

By that he means the urban decay of the 1970s and early 1980s when Times Square was a seedy, downtrodden destination populated by pimps, prostitutes and peep show touts.

Officials have since poured taxpayer money into revitalizing the theaters and turning the square into a family friendly plaza, which is now one of the biggest tourist draws in New York.

At least a dozen topless women usually turn up each day, but the furor has kept all but the most defiant away.

“Everybody’s entitled to their own opinion. If he (the mayor) wants us out of here, he can try it,” said Saira Nicole, one of a handful plying her trade on a sticky August afternoon.

“We’re having fun. We’re entertainers. People love us,” said her colleague Angel, seeing no cause for offense and casting herself in a feminist light.

“A woman’s body shouldn’t be a sexual thing. A child should not grow up thinking that a woman’s body is something purely sexual.”

But the Times Square Alliance says visitors do complain—not just about topless ladies but other costumed creatures dressed up as cartoon characters.

A survey found that 45 percent of people who work around Times Square have been involved or witnessed an unpleasant interaction with a street entertainer soliciting money.

The backlash has seen America’s most famous naked fixture—the Naked Cowboy—strap on a stars and stripes bikini bra for the first time to err on the side of caution.

“I’m trying to teach them all manners,” he joked to AFP.

The Naked Cowboy—real name Robert Burck—says he stays on the right side of the law by making sure others approach him.

The popular performer, who has appeared on TV and traveled the world, has spent 16 years strumming his guitar in boots, briefs and a cowboy hat, come rain or shine in Times Square.

“If you’re naked and you walk up and grab somebody—again if you’re a guy and its a girl with big tits I don’t know why you’d have a problem—but again they walk up to everybody,” he said.

“I think they crossed the line with the aggressive panhandling.”

So what’s his advice?

But it’s unclear what authorities can do.

It’s legal to go topless in New York. The first amendment to the US Constitution enshrines people’s right to wear a costume. Panhandling is also allowed on streets.

The only thing not allowed is “aggressive” panhandling.

The Daily News, which is campaigning to have the women banned, says the answer is semantics. Reclassify Times Square as a park, where solicitations are prohibited, it says.