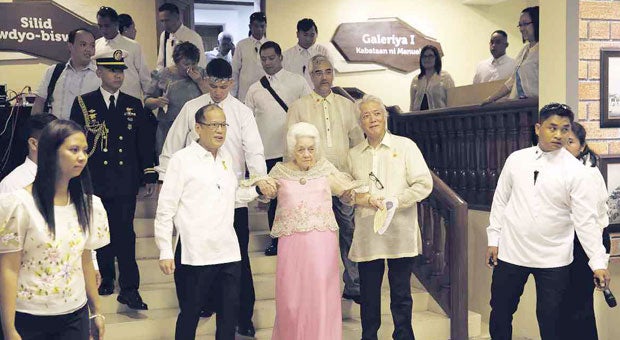 The late President Manuel L. Quezon has been finally recognized for his “open door” policy during the Commonwealth period, which allowed the entry into the country of more than 1,300 Jewish refugees fleeing the horrors of Nazism under then German leader Adolf Hitler.

During simple rites at Quezon Memorial Circle, the Philippine leader was awarded Wednesday the Raoul Wallenberg Foundation (RWF) Medal for his “life-saving plan” and for “reaching out to the victims of the Nazi murderous machine.”

Wallenberg was a Swedish diplomat who saved an undisclosed number of Jews and persecuted people in Hungary during the Holocaust. His death while under Soviet captivity has been the subject of controversy.

The medal was handed to Ma. Zenaida “Nini” Quezon Avanceña, daughter of Quezon, by Effie Ben-Matityau, Israel’s ambassador to the Philippines, and Lee Blumenthal, board member of the Jewish Association of the Philippines.

President Aquino and other government officials attended the ceremony at the newly renovated Quezon Museum, which was formerly the Quezon ancestral home in New Manila, Quezon City. It was transported piece by piece to Quezon Memorial Circle.

In a statement, the RWF said Quezon’s “original life-saving plans were more ambitious and far reaching.”

“In fact, he wanted to absorb some 100,000 Jewish refugees from Nazi-occupied Europe. However, his monumental project was thwarted by the outbreak of World War II and the Japanese invasion of the Philippines.”

The group, which has offices in Jerusalem, Buenos Aires and New York, cited Quezon for epitomizing the “spirit of civic courage and solidarity exemplified by Raoul Wallenberg and all the men and women who reached out to the Nazi victims.”

The RWF noted that “more than 300 heads of state, Nobel Prize laureates and distinguished personalities from all walks of life are honorary members of the foundation.”

“One of the first to join its ranks was the then Archbishop of Buenos Aires Jorge Mario Bergoglio, better known today as Pope Francis,” it added.

The RWF event coincided with the 137th birth anniversary of Quezon, described by Malacañang as “one of the many Filipinos who not only dedicated their careers to service but also led a life worthy of example.”

“His accomplishments as a statesman include the ratification of the Tydings-McDuffie Act, which led to Philippine self-government and eventual independence from the United States. Also among his legacies are his advocacy of women’s suffrage and the institutionalization of Filipino as our national language,” the Palace said.

It added that Quezon’s “beliefs on the importance of moral and civic virtue are encapsulated in his Code of Citizenship and Ethics.”