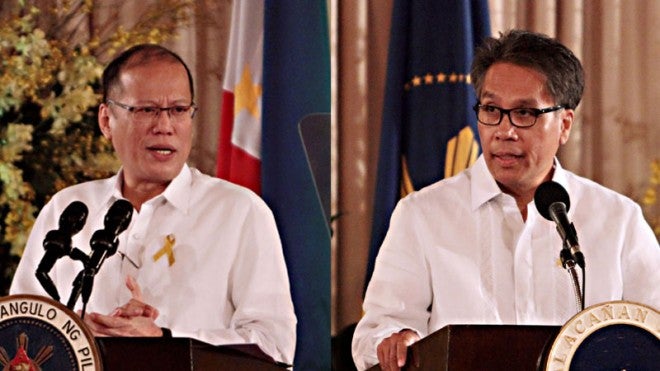 In a statement, Cavite Rep. Elpidio Barzaga said a “Mar-Noy tandem would be the dream ticket, a ‘dream team’ for the Filipino people—our bosses.”

He said the tandem was the only feasible one since Senators Grace Poe and Francis “Chiz” Escudero were noncommittal to the President’s plea to keep the administration coalition intact.

Poe and Escudero ran under the Liberal Party ticket Team PNoy in the 2013 midterm elections. They are believed to team up as president and vice president in the 2016 elections.

A Mar-Noy tandem would continue the reform agenda of the administration, said Barzaga, who is from coalition partner National Unity Party.

He said there was no legal impediment to Aquino running for lower office.

“After all, public service aside from being never-ending does not demand a certain position in order to help our people.  As the saying goes, a journey to a thousand miles starts with a single step.  PNoy has not only started with a single step but already made a hundred steps and in order that the journey to a straight path shall reach a thousand miles, PNoy must still be part of it,” Barzaga said.

“The idea of urging the President to be Roxas’ running mate is not far-fetched. PNoy is well-loved by the people. A Roxas-Aquino tandem is going to be a sure-fire winner. It’s going to be unbeatable,” he added. Marc Jayson Cayabyab/RC