Putin dives in mini-sub to shipwreck off Crimea 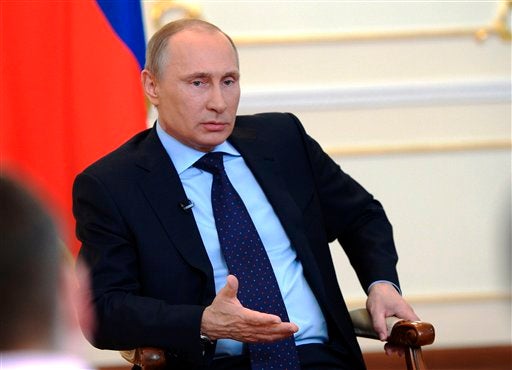 MOSCOW, Russia—Russian President Vladimir Putin burnished his action man image on Tuesday by diving down in a mini-submarine to explore a shipwreck off the coast of the Crimea peninsula that Moscow seized from Ukraine last year.

Putin—wearing a beige pantsuit—plunged down to a depth of 83 meters seated alongside the pilot in the glass-bubble cabin of the Dutch-made vessel.

“83 metees is a pretty substantial depth,” Putin told journalists in televised comments after the dive. “It was interesting.”

The Kremlin strongman went underwater to view the Byzantine-era wreckage in the Black Sea off Crimea that included a trove of 10th century pottery.

The remains were discovered off the coast of Sevastopol by Russian divers earlier this year.

“It is a galleon that was transporting civilian cargo through the bay of Balaclava,” Putin said.

“It is still to be investigated by experts. I have to say that there are not that many similar remains like this in the north of the Black Sea.”

Putin has become known for his eye-catching stunts during his fifteen years in charge of Russia, that have included flying with cranes, riding topless on horseback and darting an endangered tiger.

In 2009 he dove down around 1,400 m to the bottom of the world’s deepest lake Baikal in another mini-submarine.

Putin also hopped into another miniature submersible in 2013 to take in a 19th century naval frigate shipwreck on the bed of the Baltic Sea.

The carefully choreographed photo opportunities are designed to buff up the image of the judo black belt president among ordinary Russians.

Putin’s popularity has reached an all-time high in recent months of just under 90 percent as Russia’s slavish state-run media has gone into overdrive to promote him since the seizure of Crimea in February 2014.

Not all of Putin’s eye-catching adventures have, however, been unmitigated successes.

A stunt in 2011 that saw a wetsuited Putin apparently find two ancient amphorae during a dive off the Russian coast close to Crimea drew widespread derision after it turned out the urns had been deliberately placed there.

Putin is in the middle of his third visit to Crimea since he ordered out thousands of special forces troops to take control of the peninsula.

Ukraine’s President Petro Poroshenko on Monday lashed out over the trip saying it would “escalate” a 16-month separatist conflict in east Ukraine that Kiev accuses Moscow of masterminding.

Putin, however, batted away the criticism over his visit and insisted the “blame” for a recent spike in violence in east Ukraine lies with the government forces.

During his visit to Crimea, Putin has held high-level meetings to discuss the region’s abysmal economic record under Moscow rule, which even led the local governor to ask the Russian president to allow Ukrainians to work in the service industry.

The region is under tough Western sanctions that have seen its banking system hit and foreign firms pull out.

Tourism, a mainstay of the region’s economy, has also plummeted.