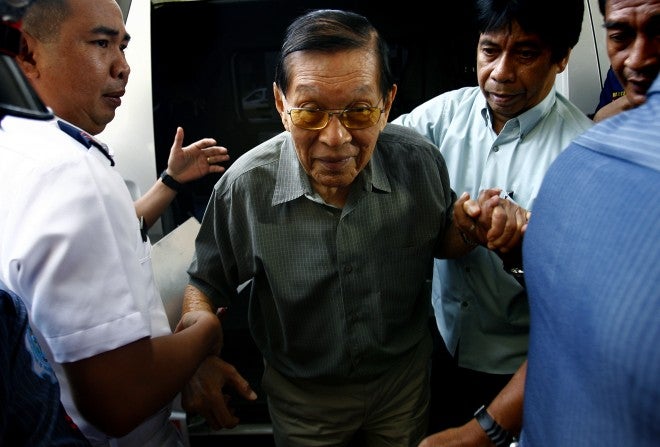 Following the Supreme Court’s granting of temporary liberty to Senator Juan Ponce Enrile, the 91-year-old senator’s daughter Katrina Enrile said her father was confident that his case would be treated by the high court “separately and positively.”

“He always had faith… He has been very patient. He said that his time inside [the Philippine National Police General Hospital] has been very well spent. Nothing has changed. Maybe he’s ready to come home and give us a hug, all of us. We’re just waiting for that,” Katrina Ponce-Enrile said in an interview with ABS-CBN News Channel on Tuesday.

In an 8-4 vote, the high court on Tuesday granted Enrile’s motion to reverse the Sandiganbayan Third Division’s ruling denying his bail plea.

“My dad is a lawyer by profession so he knows the case very well. Given his age and everything and all, I think he was very confident that the court would look at his case maybe separately and positively. So he just waited, and now we have it. We’re just happy,” Katrina added.

The bail is set for P1 million.

Katrina said the rest of the family is now looking forward to welcome their patriarch home “once the paper work is done,” adding that her father’s camp is expected to process the bail within the day.

“We’re just gonna wait for him here… to come home and spend time with us. That’s the way we want it. Just to be quiet,” she added.

Minutes after the release of the SC decision, the younger Enrile also took to Facebook to share the news: “My dad will finally be coming home!”

Enrile, who is currently under hospital arrest, is one of the three senators accused of plunder in connection with the pork barrel scam. Co-accused senators Jinggoy Estrada and Ramon “Bong” Revilla Jr. are detained at the PNP custodial center. Yuji Vincent Gonzales/JE