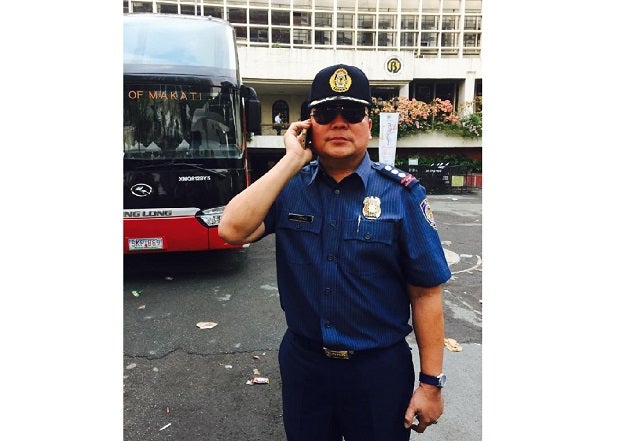 Senior Superintendent Elmer Jamias talks on the phone while monitoring the standoff between police and supporters of Mayor Junjun Binay at the Makati City Hall. INQUIRER FILE

The camp of Vice President Jejomar Binay said on Tuesday that the police official who figured in a standoff during the suspension of Mayor Junjun Binay in March was “rewarded” for doing “the wishes of DILG Secretary (Mar) Roxas.”

“This is a clear reward for being the enforcer of Mayor Jun Binay’s suspension and for blatantly violating the rights of Makati citizens to favor the wishes of DILG Secretary Roxas,” Quicho said in a statement released by the Office of the Vice President.

He added, “This appointment exhibits that under the daang matuwid slogan, those who please and follow Sec. Roxas gets the immediate ‘pabuya’ of a juicy position even at the expense of a competent and effective alternative.”

On March 16, Jamias, who was then deputy district director for administration of the Southern Police District, was confronted by JV Bautista, interim secretary general of the United Nationalist Alliance, for the police presence at the Makati City Hall.

The Binay camp then accused Jamias of enforcing “Rule of Mar,” referring to Roxas, who has been declared as the standard bearer of the ruling Liberal Party.

It said Jamias violated the rights of people to assemble and show their support for the younger Binay.

During the heated exchange in March, Jamias asserted that the police were there to maintain peace and order.

“Why are we being asked to leave?” he asked Bautista in Filipino. But the UNA official said the police should not be there.

Jamias said their group would stay at the city hall until the Department of Interior and Local Government issued a recall order.

In an earlier interview, Jamias said his promotion was not due to politics.

“I had three meritorious promotions for gallantry in action. This is my time. I have already passed the career ladder,” he said on Monday when he assumed office.

He has been nicknamed “Barako ng Maynila” for his campaign against criminals in the capital city. Kristine Angeli Sabillo