Mar-Vi is ‘hard to beat’ 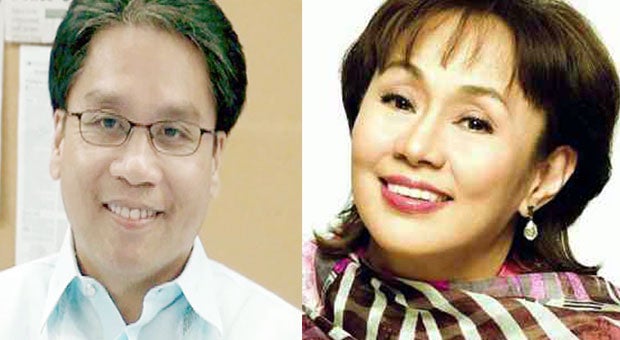 Interior Secretary Mar Roxas on Saturday said the ruling Liberal Party (LP) was seriously considering Batangas Gov. Vilma Santos-Recto in its search for a vice-presidential running mate for him in next year’s national elections.

Roxas, the LP-led administration coalition’s standard-bearer, did not say in a text message to the Inquirer whether he had already talked to Santos-Recto, but expressed confidence that the multiawarded actress-turned-politician would be an “outstanding” and “hard to beat” vice-presidential candidate.

Asked if the LP was considering other potential candidates, Roxas said, “I’m smiling … So my lips are not really sealed.”

On the “Mar-Vi” tarpaulin banners that have sprouted in many places in Batangas, Roxas said “those tarps are independent initiatives” of the residents of the province.

During his July 10 visit to the Batangas provincial capitol, where he distributed patrol jeeps to local governments in the Southern Tagalog region, Roxas said he was open to the idea of a team-up between him and Santos-Recto.

“Well, why not? It’s not for me to say. But let us just look at the records,” he told reporters.

Roxas cited Santos-Recto’s years in public service, first as Lipa City mayor and then as governor of Batangas.

“A whole myriad of budgetary deficit to security, to agriculture—she faced all of that so, if we examine the records, she has the experience and capability and she always knows what to do. So it’s up to her and the people of Batangas to decide what happens next,” Roxas said.

But what is truly important, he said, is pursuing daang matuwid, the Aquino administration’s reform program.

Malacañang insiders interviewed for this report agreed that Santos-Recto would be a good choice, noting she was an “outstanding government official and one not tainted with corruption.”

A Palace official, who asked not to be named for lack of authority to speak to reporters, said that with her “star power” and “mass appeal,” Santos-Recto would surely boost Roxas’ presidential candidacy.

Santos-Recto, who is serving her last term as governor of Batangas, has said the LP has not yet offered the vice-presidential slot to her.

“No formal talks yet,” she said in a recent interview, adding she had not received an invitation from Roxas’ camp.

Santos-Recto was among more than 2,000 local officials who joined an LP gathering in Greenhills, San Juan City, on Aug. 3 in support of Roxas, who received President Aquino’s endorsement as administration presidential candidate on July 31.

In another interview, Santos-Recto said Roxas should personally pick a running mate with whom he could comfortably work with.

“He should pick his running mate, not accept someone who is chosen by others or recommended to him. The important thing is that he should be able to work comfortably with a partner who will run the government with him for six years,” she said.

She said she was thinking of running for the House of Representatives, but had not made a decision.

Her husband, Sen. Ralph Recto, is up for reelection next year. Her son, film and television actor Lucky Manzano, is reportedly considering running for a local office in Batangas.

Davao City Mayor Rodrigo Duterte, a potential presidential candidate but remains undecided, has said Santos-Recto will be a “good choice” of running mate for him.

“It can’t be (Sen.) Grace Poe because I think she has decided to run for President,” Duterte said.

Poe, who topped the 2013 senatorial election, holds a commanding lead in the voter preference polls for the presidential election, but has not decided whether to run for Malacañang. The LP is trying to convince her to come aboard as Roxas’ vice-presidential running mate.

She has said, however, that if she will run, she will be more comfortable running with Sen. Francis Escudero, a statement understood as a rejection of the administration’s offer for her to team up with Roxas, who needs some image burnishing.

Roxas is unpopular with voters, placing third or fourth in the voter preference polls, but the LP says President Aquino’s endorsement will improve his ratings.

Roxas open to running with Vilma Santos in 2016

Vilma Santos: No more politics after 2016