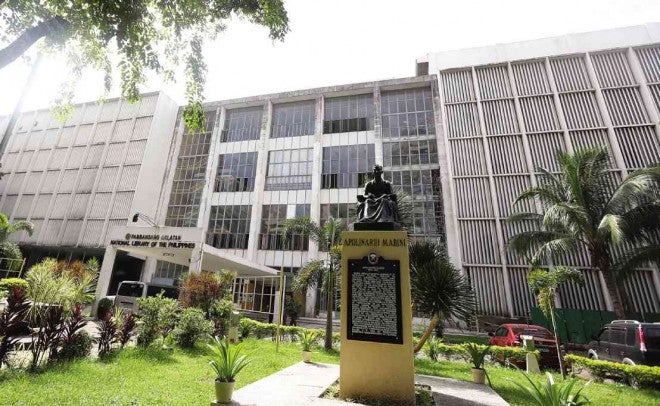 STRENGTH IN LEARNING A reinforced and more earthquake-proof National Library of the Philippines, which marked its 128th anniversary last week, is set for reopening next month. Photos by MARIANNE BERMUDEZ

DRAWING some 500 “unique visitors” a day or up to 150,000 a year, the National Library of the Philippines (NLP) refuses to be considered a relic—at 128 years old.

For even its officials now use the language of Web analytics to stress how the institution remains a go-to place for study, research or pleasure reading even in the age of Googling.

Efforts are underway to ensure that the neoclassical building on TM Kalaw Avenue in Manila—home to 1.7 million books, periodicals and treasured documents, including original copies of Rizal’s Noli Me Tangere, El Filibusterismo, and Mi Ultimo Adios—won’t fade and crumble, literally.

There was no commemorative program or any fanfare when the library marked its 128th anniversary on Aug. 12, but that’s because retrofitting works to make the structure more earthquake-proof had been going on in phases since 2013, according to NLP Director Antonio Santos.

The general section has been closed to the public since November 2014 to allow the staff to conduct an inventory and move the prized collections away from the affected work areas.

The upgrades will not alter the building’s exterior design as originally envisioned by National Artist Jose Zaragoza as the structure undergoes “adaptive reuse,” the director said.

“Researchers need our services. But we’re doing the reconstruction of this area so we can reopen our services to the public in three weeks,” said Anne Rosette Crelencia, a librarian assigned to the Filipiniana division.

It’s easy to assume that the NLP’s relevance and utility have been sharply diminished by the virtual library called the Internet, but it is actually facing the digital challenge head-on.

In 2003, the Department of Science and Technology (DOST) partnered with the NLP, University of the Philippines, Commission on Higher Education, and the Department of Agriculture to form the country’s first electronic library, the “e-Lib.” The subscription-based e-Lib serves as an online repository of more than a million bibliographic records, restored and digitized Filipiana materials and other online resources. Its main data center is housed at the National Library.

Another DOST-NLP partnership expanded Starbooks (Science and Technology Academic and Research-Based Openly Operated Kiosk Station), a digital library of both foreign and local science and technology resources which can be accessed without Internet connectivity. The DOST aims to keep NLP librarians abreast with its rich sci-tech content.

Computer terminals at the NLP lobby have long replaced the old-fashioned index card cabinets with the Online Public Access Catalog (Opac), which allows users to locate the books and other materials they need through an automated search.

“Before we closed our services last November, we were attracting more than 500 visitors a day,” Crelencia said. The last annual record showed a total of 156,515 unique visitors.

Teachers and professors deserve some credit for this, she said, especially those who require their students to visit the NLP to do research or “understand how the research process works.”

The NLP keeps its collections stocked and updated thanks to Presidential Decree No. 812 or the Legal and Cultural Deposit Law, which requires publishers in the country to give the NLP two copies of every new title they produce. It is the only library in the country that enjoys this privilege.

What began in 1887 as the Museo-Biblioteca de Filipinas, with only a 100-volume collection, now packs its shelves with some 210,000 books and over 880,000 historic documents.

It practically safeguards the very seeds of Filipino nationhood, like the original manuscript of the national anthem and the Philippine Declaration of Independence.

The Rare Books section includes the Philippine Incunabula, a collection of materials published from 1593 to 1640, from an era when the art of printing was still in its infancy in the country.

A part of NLP funds goes to the preservation of these Filipiniana materials. In 2011, for example, it had to restore its deteriorating first-edition copies of the “Noli” and “Fili” in time for the celebration of Dr. Jose Rizal’s 150th birth anniversary.

It continually holds projects and activities promoting literacy and librarianship, especially among the youth. It allots a section for blind readers and has conducted workshops to enhance library services for persons with disabilities.

With a staff of 170 handling 10 divisions, the National Library (which is under the National Commission for Culture and the Arts) was given a budget of P270.2 million this year, up from P194.27 million in 2014.

The NLP complex on TM Kalaw was completed 55 years ago and the ongoing retrofitting works marked the first major upgrade of the building, according to Santos. The general reading section is targeted for reopening on Sept. 1.

Read Next
QCPD: Pastor murder ‘brains’ now in hiding
EDITORS' PICK
Heads may roll at BOC, says Palace if sugar smugglers are allowed to use recycled import permits
What to watch out for when selecting a video surveillance solution
Apple warns of flaw that lets hackers into iPhones, Macs
House energy committee chair Arroyo bats for cheap electricity
46% of schools nationwide to have full face-to-face classes on Aug. 22
vivo brings to the Philippines a powerful smartphone with a slimmer body, the vivo Y02s for only PHP 6,499
MOST READ
DepEd to give teachers P5K cash allowance within first week of classes
LOOK: Miel Pangilinan dazzles in glittery pre-debut shoot
Man abducted in Batangas gasoline station, found dead in Quezon
Dressing the dead: Indonesian villagers clean corpses in afterlife ritual
Don't miss out on the latest news and information.