Spared when heads rolled, EPD chief retires amid thanks 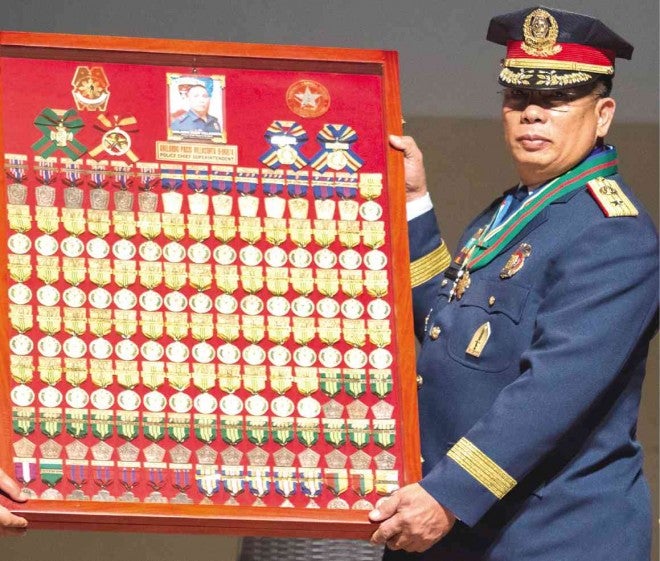 HEAVY METAL Villacorta with his collection of medals during the EPD program marking his retirement.
JILSON SECKLER TIU

THE MAN WHO ONCE worked as a factory worker and a security guard stepped down amid applause on Friday from the helm of the Eastern Police District (EPD), his cell phone filled with congratulatory text messages from people who saw him as a man who brought about “change.”

Villacorta was the only director who was not sacked when Interior Secretary Mar Roxas in October last year ordered a sweeping revamp of the top commands of the five police districts making up Metro Manila. The four other directors lost their post supposedly for their failure to curb crime in their respective areas.

According to then National Capital Region Police Office chief Director Carmelo Valmoria, Villacorta was spared because he had “the best performance.”

Villacorta, who entered the service after graduating from the Philippine Military Academy (PMA) in 1983 (Matikas Class), believes he is leaving the men and women of EPD in “very high morale.”

“Through various training and seminars, we were able to change the character of our policemen. They became more responsible and dedicated in their work,” Villacorta said in an interview on the sidelines of Friday’s program at Tanghalang Pasigueño in Pasig.

When asked which of the four EPD cities had improved the most under his watch in terms of peace and order, Villacorta cited Marikina which he said was able to put in jail all of its 10 most wanted persons last year.

“Marikina has the most number of arrests and drug seizures (compared to the other cities). According to the local officials there, nothing like that has happened for more than 20 years,” said Villacorta. (A Marikina resident and City Hall official, who asked not be be named, noted that crimes perpetrated by motorcycle-riding assailants had all but ceased in his part of the EPD.)

Villacorta attributed this success to the “Bantay Lahat, Lahat Bantay Kulturang Laban sa Krimen” program initiated by the EPD almost a year ago to enhance coordination between residents and local law enforcers.

He also gave credit to his men for “solving within four days” the P1.2-million robbery-abduction case in September last year—also known as the Edsa “hulidap” incident—which allegedly involved Quezon City policemen. The case is currently being heard in the Mandaluyong City court.

The retiring EPD chief is also executive director of the Society of Catholic Communities in Action (SCCA), according to EPD spokesperson PO2 Catherine Capinpin. Part of Villacorta’s personal time have been spent conducting spiritual and emotional healing seminars held by the SCCA, together with Fr. Bembol Hetiroza of Marikina and Fr. Jerry Yabyabin of Bataan province.

His involvement in Church activities may help explain why the EPD seminars during his term tackled not just law-enforcement concerns but also good parenting, leadership and values formation.

A native of Urdaneta, Pangasinan province, Villacorta said he actually dreamed of becoming a doctor in the military to be of help to wounded troopers. But due to his family’s financial difficulties, he was forced to drop out of college and worked as a factory worker and later as a security guard. Through a high school friend he learned of the PMA entrance exam, which he soon took and passed.

Villacorta said retirement for him may just mean taking a vacation until December. “I intend to join the government service again after a few months. I’m still willing to work, maybe as a consultant on counter-terrorism and intelligence.”

Senior Supt. Wilson Caubat, the district director for administration, has taken over as EPD officer in charge. With a report from Maera Tezuka