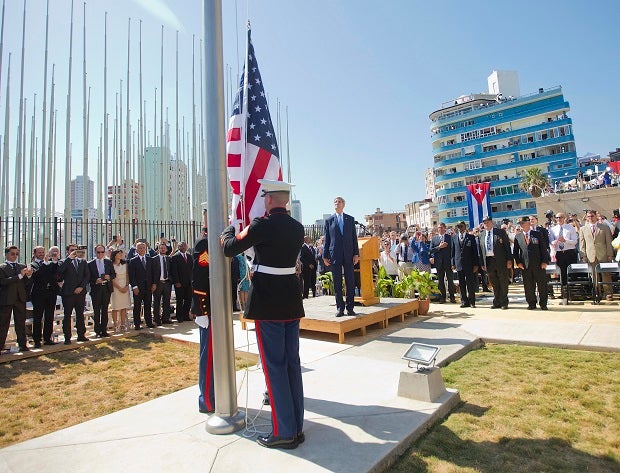 Secretary of State John Kerry, and other dignitaries watch as US Marines raise the US flag over the newly reopened embassy in Havana, Cuba, Friday, Aug. 14, 2015. AP

Shedding his jacket and tie, US Secretary of State John Kerry went for a walk around Old Havana Friday, checking out a Cuban cigar stand on a break from his historic visit.

Surrounded by bodyguards and journalists, Kerry got a personal tour of the colonial district from city historian Eusebio Leal.

Bemused tourists and locals soon flooded Saint Francis of Assisi Square as Kerry took in the UNESCO World Heritage Site after giving a joint press conference with his Cuban counterpart.

Kerry paused at a cigar stand, appearing to take particular interest in a humidor, which he picked up and examined as he chatted with his entourage.

Kerry told reporters he was enjoying being in Havana, noting the Hotel Nacional, where the press conference was held, had previously hosted such personalities as Winston Churchill, Ernest Hemingway and Frank Sinatra.

Kerry, the first US secretary of state to visit Cuba since 1945, presided over the ceremonial raising of the flag at the newly reopened US embassy on Friday.

The visit came eight months after the rapprochement announced by US President Barack Obama and Cuba’s Raul Castro on December 17, ending a Cold War freeze that lasted more than half a century.

Flag raised over US embassy in Cuba