Man’s hands, feet to be amputated after food poisoning bout 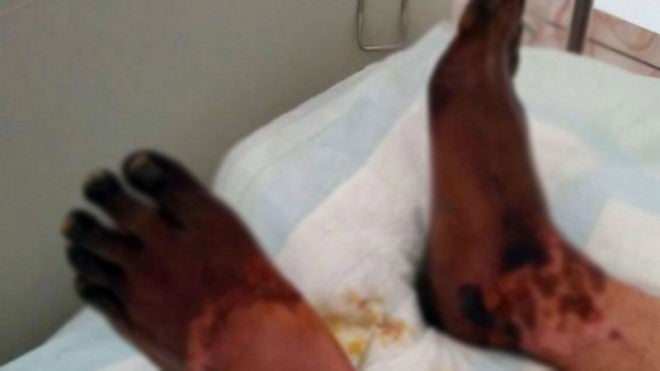 SINGAPORE – – What initially seemed like a standard case of food poisoning – vomiting, diarrhea and bouts of fever – turned into a matter of life and death for a 50-year-old man.

After Tan Hwee Boon was taken to hospital, he passed out and slipped in and out of consciousness for two weeks.

When he finally woke up, a shock awaited him. His hands and feet had shriveled and turned black.

Doctors at Khoo Teck Puat Hospital (KTPH) then broke the dreaded news to Tan – his hands and legs had to be amputated.

The technician and his wife, Choong Siet Mei, 47, a housewife, were distraught.

While he was out cold, she had to endure the horror of seeing his hands and feet gradually turn gangrenous.

Ironically, the drug that saved Tan’s life was the cause of the gangrene.

Choong said, “I watched his limbs and nails turn from purple to black before they dried up. I couldn’t bear to tell him at first.”

“But after his near brush with death, I’m just glad his heart is still beating. Our children’s father is still alive,” she added.

Her husband’s ordeal started in the wee hours of July 13, when he felt giddy and suffered bouts of vomiting and diarrhea in their four-room flat in Woodlands.

The father of two was taken to KTPH in an ambulance and kept under observation at the hospital’s accident and emergency department, where he passed out.

“When I first went in, I felt terrible and couldn’t really tell what was going on,” Tan said.

“Before the doctors could tell me anything, I passed out. When I woke up, my hands and feet were already black.”

In the first two weeks of his three-week stay in the intensive care unit (ICU), Tan was given a drug that directs blood flow to his vital organs.

“He had to take the drug to save his life,” said Choong.

The drug kept Tan sedated and he drifted in and out of consciousness.

“I called out to him and asked him if he recognized me. He would nod, then drift off to sleep.”

She said she tried not to stay too long when she visited her husband of 16 years in the ICU.

“It’s a cold, cold place. I couldn’t bear to see him in this state for long without crying.”

During this period, she had even mentally prepared herself to lose her husband.

“The doctor told me to be by my husband’s side with my two children and say words of encouragement so he would have the will to live,” she said.

While the drug saved Tan’s life, he had to deal with the side effect of having his limbs shrivel.

The drug caused a narrowing of the blood vessels in his body, which meant less blood could flow to his extremities, said Choong, who added that doctors had warned her about potential side effects among some patients.

The lack of oxygen caused his hands and feet to turn purple, then dark red. Eventually, they turned black and the flesh started to shrivel.

“It looked like his nails were bruised initially. Each time I visited him, I would look closely at his hands and feet. But I didn’t dare to tell him what was going on.”

When TNP visited Tan in the hospital yesterday, his hands and feet were wrapped in thick bandages. His fingers and toes that peeked out from his bandages were blackened and looked hard and stiff.

He can barely feel anything in his hands and feet, and cannot move them.

“When I woke up, I was shocked to find my hands and feet in this state,” he said as he raised his hands.

“I was so confused when the doctors tried to explain the situation to me… They said my hands and feet may have to be amputated so that the infection won’t spread to the rest of my arms and legs.”

His confusion turned to panic as he struggled with the shocking news.

“Before I became unconscious, I thought it was just food poisoning… Waking up and being told I might have to lose my limbs, I kept thinking there had to be another way.”

Choong also remained hopeful for a miracle and that somehow her husband’s limbs could be saved.

But two days ago, the KTPH doctors said the only course of action is to amputate.

A member of the team told TNP, “His hands and feet are black because there is no blood in them anymore. They are essentially dead and if we do not amputate them, the dead tissue would spread to the other parts of his body.”

Today, Tan will have his hands amputated – a course of action he has accepted as the only way to move ahead.

He admitted the initial days were spent in desperation trying to find a way to avoid it. He roped in his friends and family to help him research his condition.

Their efforts proved futile, and Tan was forced to accept the inevitable.

“I was so scared. Not just for myself, but for my family,” he said as he looked as his wife.

“I work as a technician. What future do I have at work now?”

Admitting his nervousness about the operation, he joked: “If I’m afraid, I’ll just escape from the hospital at night.”

After a pause, he added: “But I can’t run away because of my feet.”

Choong laughed at his self-deprecating comment, then her face gave way to grief as she tried not to break down in front of her husband.

Tan said his wife may have to look for a job. Apart from maintaining household expenses, he has chalked up a huge medical bill of $28,000, which is set to grow.

But Choong was in two minds about her husband’s suggestion.

“There’s nobody to take care of him after his operation and I haven’t worked for 16 years. Will I be able to find a job that will cover the cost of us hiring a helper to look after him?” she said.

A medical social worker from the hospital said Tan’s employer, Singapore Oxygen Air Liquide, is helping to seek workmen’s compensation for him that could amount to $15,000.

Tan does not want his children to be there when he enters the operating room today.

“My children are mature but I can see that they are still shocked by what I have to do. I don’t want to put them through any more emotional stress,” he said.

When asked about his plans in the future, Tan looked resigned.

Madam Choong added, “We can only take one step at a time. There’s no use worrying so much.”