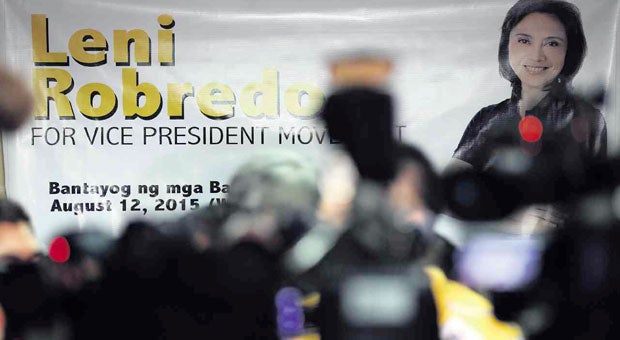 POLITICS’ FAST-RISING STAR One of the streamers of the “Leni Robredo for Vice President Movement” unfurled at the launch of the initiative in Quezon City. Camarines Sur Rep. Leni Robredo is the widow of Jesse Robredo, the widely admired public official who was killed in a plane crash in August 2012. EDWIN BACASMAS

Unwilling to answer a clamor that she run for Vice President next year, Camarines Sur Rep. Leni Robredo was a no-show at Wednesday’s launch of a movement to convince her to take the leap.

“The best leaders are the reluctant leaders,” singer-composer Jim Paredes said, extolling the virtues of the congresswoman and widow of the late Interior Secretary Jesse Robredo, the multiawarded former mayor of Naga City.

“I think Leni here is a blessing like Cory [Aquino] was,” Paredes said, adding that the nation needed leaders with conscience and humility.

He said, “I feel safer with leaders like that, not like those who harbor certain presumptions—that ‘I have money, machinery, or [am] doing well in the surveys.’”

The Leni Robredo for Vice President Movement was organized by the civil society group Kaya Natin Movement and supported by like-minded groups and individuals. The launch was held at Bantayog ng mga Bayani in Quezon City.

Asked on Tuesday if she would appear at the event, Robredo exclaimed: “Oh no! I’m not part of it. In fact, I asked Harvey [Keh] early on to stop pushing for it, but he wasn’t listening.”

“My kids are getting stressed because of it,” she said in a text message.

“Our point is we cannot wait forever” for Poe to make a decision, he said. “We have to organize.”

He said Robredo herself had expressed a preference for Poe, the front-runner in the presidential preference surveys, to accept the LP’s offer to slide down as a vice presidential candidate.

But if this would not materialize, Tañada said Robredo would fit the bill.

If Poe does decide to be Roxas’ running mate, however, “this movement would transform into a Leni Robredo for Senator Movement,” Tañada said.

A University of the Philippines economics graduate and a lawyer, the 54-year-old Robredo is planning either to seek reelection in her congressional district or to run for a Senate seat.

She earlier said her awareness rating was too low, and that she had too little experience as a politician to run for Vice President.

But Anak Mindanao Rep. Sitti Turabin-Hataman, one of her supporters, said Robredo’s lack of political ambition was precisely what convinced her of Robredo’s qualification.

“We know she has not yet declared. She has a lot of apprehensions. These are the characteristics, the level of awareness and humility we want in a candidate. We know that if she is put in the position, she will double her efforts because she knows her limitations,” Hataman said.

Former Pampanga Gov. Ed Panlilio described Robredo as “a true person, a good Filipino, who loves her country, shows deep sympathy for her countrymen, who lives simply, who loves her family and who puts God at the center of her heart.”

“Every week she would go home, at least thrice a week, to go around each barangay (village) in her district. Where do you find a congresswoman who goes to the farthest reaches of her district?” he said.