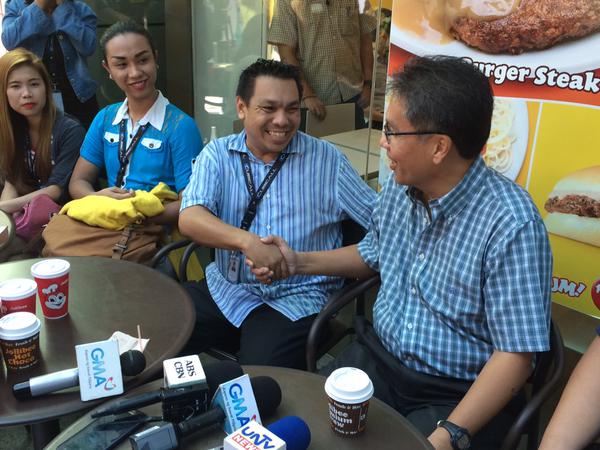 CEBU CITY—“You must be having a good day that’s why you’re still wearing that red lipstick,” Interior Secretary Mar Roxas told a young woman, who shrieked upon hearing his remark.

When somebody answered that it was actually her birthday, Roxas asked her: “Where’s the blowout? You are blushing.”

Wearing a checkered polo, he spent a few minutes shaking the hands of about 20 employees of various business process outsourcing (BPO) firms, including start-up companies owned by middle-aged local entrepreneurs.

Roxas appears to have begun his charm offensive during a whirlwind visit here on Wednesday.

Roxas, who won President Aquino’s support to be the ruling Liberal Party (LP) standard-bearer in the 2016 elections, met over breakfast with a group of call center agents at a Jollibee restaurant in the Cebu IT Park.

Later in the day, he addressed the celebration of the Farmers’ Day at the capitol building of this vote-rich province and the annual convention of the sugar industry sector in Waterfront Cebu Hotel.

Between sips of coffee from a paper cup, a visibly energized Roxas held an hourlong informal dialogue with the BPO workers, asking them about working conditions in their companies.

Roxas, whose work as a former lawmaker and secretary of the Department of Trade and Industry earned him recognition for developing what is now a $25-billion industry, also recalled how he helped entice investors to start the BPO business in Cebu more than 15 years ago.

“Who’s inbound? Are you all in voice? Who’s in nonvoice? Do you do customer support?” he asked them, referring to the kinds of services offered by call centers.

“How many of you here have been able to make a down payment for an apartment or a car? None of you? Who among you are able to pay off your debts?” he asked, smiling.

Jumyl Maypa, chief executive officer of Flings Inc., said BPO workers in Cebu earned at least P20,000, depending on what type of services their companies offered.

Roxas also joked about the relationships among call center agents and how their lifestyle had affected their families.

“TL used to mean ‘true love,’ but now it stands for ‘team leader,’” he said in reference to supervisors in BPO firms.

“Who among you are hit by their parents because you now only speak English and they can’t understand what you’re saying?” he said in jest.

Turning serious, Roxas then asked how the government could help them improve their working conditions and increase the productivity of their companies.

He said he and Cebu Gov. Hilario Davide Jr. had discussed the possibility of bringing the services of some government agencies to commercial districts where BPO companies were located.

Maypa agreed that most of some 100,000 BPO personnel in Cebu had not been able to secure pre-employment documents, such as clearance from the Philippine National Police and the National Bureau of Investigation since they work during “graveyard shifts.”

He said they would also like easier access to the Philippine Health Insurance Corp. (PhilHealth), Social Security System (SSS) and Home Development Mutual Fund, or Pag-Ibig.

“If it’s possible, maybe we can have online application (and registration) for these government agencies,” Maypa said.

“We will work on this,” Roxas replied. “With the help of Governor Davide, we can have a caravan of Pag-Ibig, SSS, NBI and PhilHealth here in Cebu. We will make this a pilot area to test this service.”

He also vowed to talk with the concerned national offices in rolling out a similar program in BPO locations in Metro Manila.

“Call center agents work on night shifts. They would be inconvenienced if they still have to line up during the day when they should already be resting,” Roxas said.

“This is one aspect of the call center industry that the government should make adjustments.”

Farrah Rodriguez, an employee of Teleperformance, sought Roxas’ assistance in providing more police visibility along the main roads in the city, noting that a number of call center agents had fallen victims to snatchers and robbers.

She also asked Roxas how he could help them own affordable homes since call centers like her usually rent apartments located an hour away from their workplace.

“Although we earn reasonably enough, we’re still unable to buy a home for our children,” Rodriguez said. “We also have a problem about security. We actually feel fear when we go home at dawn.”

After their dialogue, Rodriguez said she was impressed with what she heard from the interior secretary.

Road to success in progress

“I know that the road to success is under construction and you can’t have success overnight,” she said. “I also appreciate his openness and he was not hesitant to listen and answer our questions.”

Before he left, 54-year-old Alex Villarosa thanked Roxas for his efforts to develop the BPO industry, which now provides employment to 1.3 million Filipinos.

“I’m a former OFW (overseas Filipino worker). It was difficult for me to find employment. But now I have a job. I would like to take this opportunity to thank you, sir,” Villarosa told Roxas.