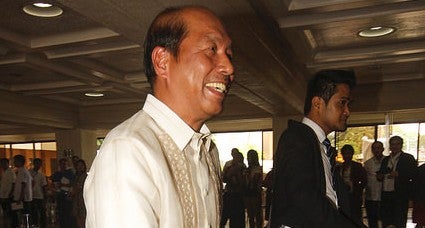 Budget Secretary Florencio “Butch” Abad on Tuesday spoke out against a lawyer who wanted Sandiganbayan to implead him in the latest pork barrel scam case.

“The motion filed by Attorney Bonifacio Alentajan is total nonsense. Not only are his accusations devoid of substance—they are also completely divorced from reality,” Abad said in a statement.

“For one, the alleged irregularities covered in the complaint took place between 2007 and 2009. I wasn’t even budget secretary then. Neither was I holding public office in that period,” he explained.

He claimed that Napoles’ NGOs still received money through the Priority Development Assistance Fund (Pdaf) under the term of Aquino.

But even Communications Secretary Herminio Coloma Jr. insisted that the incidents of alleged misuse of funds happened under the previous administration.

“Based on my understanding, the issue tackled in the case on the misuse of taxpayers’ money, according to the special audit report of the Commission on Audit, mostly happened in 2007, 2008,” Communications Secretary Herminio Coloma Jr. said during a press briefing.

Abad was representative of Batanes from 1987 to 1989 and from 1995 to 2004. He was Education Secretary in 2004 but immediately resigned, together with other Cabinet members, after the Hello Garci scandal rocked the administration of former president and now Pampanga Rep. Gloria Macapagal-Arroyo.

He was appointed head of the Department of Budget and Management in 2010 by President Benigno Aquino III.

“If he is referring to the transactions of the past administration, how can he justify holding accountable someone who is with the present administration?” Coloma asked.

Abad further explained that the special allotment release orders (Saros) and Notices of Cash Allocations (NCAs) have already been delegated to an undersecretary, contrary to Alentajan’s claim that they were issued under Abad’s authority.

“Alentajan needs to get his facts straight … It is impossible to take Alentajan’s case seriously. I seriously doubt that he will pursue this case with any sort of moral conviction, given the weakness of his arguments,” he said.

“It seems fairly clear that Alentajan is only acting under orders here, specifically to discredit my name. Giving him any measure of attention would only be a waste of time,” said Abad, who did not name the person whose orders the lawyer was supposedly following.

The secretary said that while his agency supported the Ombudsman and the Sandiganbayan in their corruption cases, “baseless allegations like Alentajan’s do not help the cause of justice.”