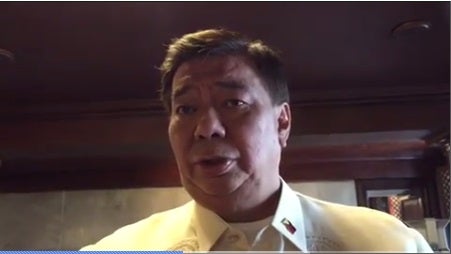 ILOILO CITY, Philippines —The Ombudsman has affirmed its earlier ruling dismissing the graft complaint against Senate President Franklin Drilon and several other officials in connection with the construction of the P747-million Iloilo Convention Center (ICC).

In a seven-page joint order approved on July 9 by Ombudsman Conchita Carpio-Morales but released to the media only on Tuesday, the anti-graft body dismissed the motion of consideration filed by former Iloilo provincial administrator Manuel Mejorada.

In its order, the Ombudsman said Mejorada failed to present “newly discovered evidence or raise grave errors of law or serious irregularities committed by this office to warrant a reversal of (its earlier ruling).”

It said the issues raised by Mejorada in his appeal were “mere rehash.”

Mejorada said he had yet to receive a copy of the ruling. He admitted having no financial capacity to further pursue his complaint.

“This is a concrete illustration of selective justice. The evidence was ignored to favor the respondents, especially Senate President Franklin Drilon. I must accept defeat in the face of this herculean conspiracy to bury the truth. I am powerless against them. I have no resources to carry the battle to the higher courts,” he said in a statement.

In its March 26 ruling, the Ombudsman dismissed the criminal and administrative complaints filed by Mejorada against Drilon, Tourism Secretary Ramon Jimenez, Public Works Secretary Rogelio Singson and other officials.

The anti-graft body had ruled that Mejorada failed to back his allegations of irregularities in the construction of the ICC, including overpricing and manipulation in the bidding.

In its latest ruling, the Ombudsman refuted Mejorada’s assertion that the criminal charges of violation of Republic Act 9184 (Government Procurement Reform Act) were swept aside in the earlier ruling. It said there was an “exhaustive discussion” on the charge.

Responding to Mejorada’s assertion that the complaint should have been referred to the Field Investigation Office (FIO) for a fact-finding investigation instead of dismissal, the Ombudsman said the action was based on the appraisal of evidence and facts of the case.

The controversial ICC is being rushed for the hosting of meetings of the Asia-Pacific Economic Cooperation (APEC) in September until October.

But the completion of the building has again been postponed until the end of August due to electrical and mechanical tests that should be conducted.

Upon completion, the ICC will be turned over by the Department of Public Works and Highways (DPWH) to the Tourism Infrastructure and Enterprise Zone Authority (TIEZA), an agency under the Department of Tourism (DOT).

The APEC scheduled events at the ICC include the Small and Medium Enterprise ministerial meeting on Sept. 21 to 25 and on food security on Sept. 28 to Oct. 6.

The DPWH has scheduled separate public biddings on Aug. 24 for the ICC’s site development and the audio-video lighting system worth P28.86 million amd 19.73 million, respectively.

The ICC is being constructed on a 1.7-hectare property donated by giant property developer Megaworld Corp. at the 72-hectare Iloilo Business Park in Mandurriao District here.

It is partly funded from the controversial Disbursement Acceleration Program (P100 million). The other funding came from TIEZA (P200 million), DPWH (P200 million) and P200 million from the Priority Development Assistance Fund or the congressional pork barrel of Drilon. SFM