A stalwart of the Liberal Party (LP) on Tuesday said that the challenge of Senator Grace Poe to other aspiring presidential candidates, including administration bet Interior Secretary Manuel “Mar” Roxas II, to give way and become vice president, was “illogical.” Video by Noy Morcoso/INQUIRER.net

Roxas invited 14 NPC members from the House of Representatives and some local allies in the Liberal Party Headquarters at the Balay Cubao Expo on Tuesday to win their political backing.

Mendoza said that Roxas sought their help in winning the support of other party members for his candidacy.

The “meet and greet” by lawmakers with Roxas does not mean that the whole party is backing Roxas’ bid for the presidency, Mendoza clarified.

(At the end of the day, the members will abide with the decision of the NPC.)

When asked on the issues raised during the meeting, Mendoza said that they thanked Roxas for the projects implemented in their districts during his term as Interior secretary.

Last month, NPC President and Deputy Speaker Giorgidi Aggabao said that they will cast their lots in the tandem of Senators Grace Poe and Francis “Chiz” Escudero as presidential and vice presidential candidates respectively. 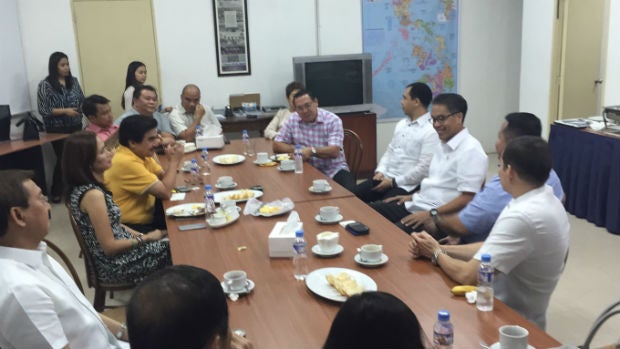 Interior Secretary and presidential bet Mar Roxas meets with members of the Nationalist People’s Coalition to win their support for the upcoming 2016 polls. Contributed photo by Laguna Rep. Dan Fernandez

He said that Poe is likely to win the elections and believes that the senator is capable of continuing the “straight path” policy under the Aquino administration.

The NPC is the second largest political party in the country with two senators, 47 members in the House of Representatives, 14 governors, and 22 city mayors. IDL