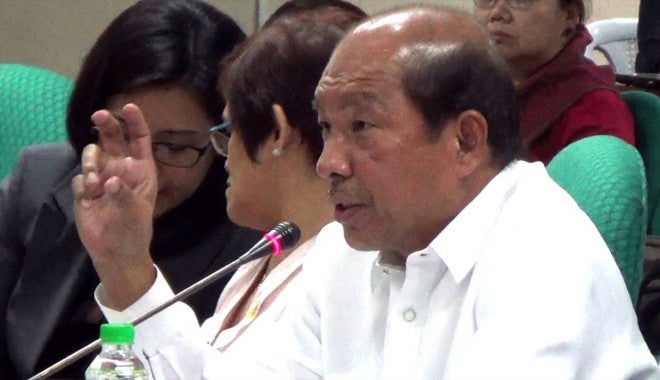 Budget Secretary Florencio Abad on Monday challenged his critics to pinpoint the pork barrel funds they claimed were inserted in the 2016 budget.

“That is a general question. You cannot answer a general question with a yes or no,” Abad said during a break at the opening of the House budget coordinating committee’s hearing on the Aquino administration’s proposed P3 trillion budget.

When members of the Makabayan bloc asked him about the pork funds, or lump-sum appropriations, Abad replied: “Unless you refer to a particular item… as far as I’m concerned, we’ve gone through the budget and there’s none.”

Abad maintained that there were only three items that could be considered lump-sum funds in next year’s budget: an estimated P50-billion allocation to local government units for their share of government royalties; P19 billion for the National Disaster Risk Reduction and Management Council; and P4 billion for contingency funds.

But Bayan Muna Rep. Carlos Isagani Zarate claimed that the 2016 budget was “oozing” with lump-sum funds concealed as special purpose funds that were increased by P61.7 billion to P430.4 billion in the 2016 budget.

“These funds that do not go through public and congressional scrutiny are the meal tickets of the corrupt. These are cleverly distributed to various local government units, which jumped by 500 percent from P15.3 billion to P56.5 billion in 2016,” Zarate said.

“The Aquino administration’s indulgence to local government units in the NEP (national expenditure program) seems like advance campaigning for the Liberal Party, apparently to make up for the fact that their putative candidate is trailing in the surveys. This is a blatant use of public funds to ensure its continued grip on power, and, this must be exposed and opposed,” Zarate said.

Zarate echoed the claims of former Sen. Panfilo Lacson and former National Treasurer Leonor M. Briones that the 2016 budget was loaded with lump-sum allocations in the nature of the outlawed Priority Development Assistance Fund (PDAF).

Abad reasoned that if the government did what his critics wanted, he should list down all the names of the 4.3 million recipients of the Department of Social Welfare and Development’s conditional cash transfer program; and the thousands of pensioners and retirees who would leave the government next year. Abad said these two items alone would make the printed budget proposal too thick and unwieldy.

“We will list them down in a separate, disaggregated list. We cannot consider them lump sum because the President or executive cannot exercise discretion over these because these are provided for with definite beneficiaries, amounts and locations,” Abad said.

But Kabataan Rep. Terry Ridon claimed he found P4.8 billion worth of projects that were labeled either as “congressional insertions or initiatives” in last year’s budget.

He said that this represented 10 percent of the P495.7 billion worth of projects in the “negative list” or “Summary of Appropriations for Later Release” in one of the annexes of the National Budget Circular No. 556 or the “Guidelines on the Release of Funds for FY 2015.”

“The DBM negative list exposes the new modus of politicians to secure pork funds. Due to the restrictions imposed by the Supreme Court decision on the unconstitutional PDAF, post-enactment identification of projects became cumbersome for corrupt politicians. To get around this restriction, certain unscrupulous legislators devised ways to insert items in the national budget before its enactment into law,” Ridon said.

He said that these items were likely to have been inserted during the budget hearings or bicameral deliberations.

The projects he cited include the Department of Energy’s P150-million program to promote alternative fuels; Department of Social Welfare and Development’s P401.5 million for individuals and families in especially difficult circumstances; and Department of National Defense’s P455.5-million allocation for miscellaneous projects of the Philippine Army, Air Force and Navy.

“The manner in which these questionable items were secretly inserted in the budget, and the fact that said items do not have details on how they will be utilized, all point to one indisputable fact: that these items are, for all intents and purposes, pork barrel,” Ridon said.