Mamasapano survivor one of 10 outstanding police officers for 2015 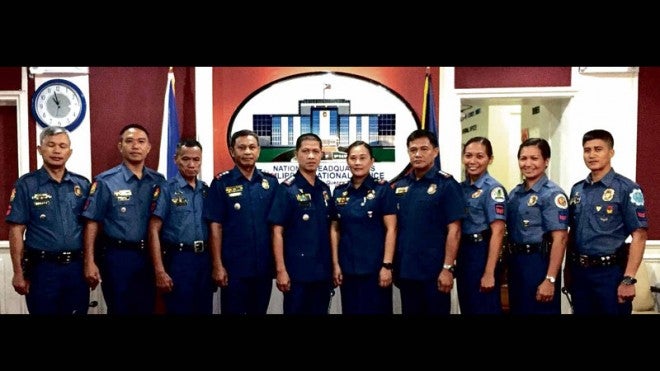 He still thinks of his 44 SAF comrades massacred on Jan. 25 in Maguindanao province and misses life as a SAF trooper.

“It hurts because I lost many colleagues. But as time goes by, I’ve eventually accepted the loss,” said Andrada, now a training officer on waterborne operations and water survival.

Andrada is one of 10 policemen chosen by the Metrobank Foundation Inc. and its other partners as the Country’s Outstanding Police Officers in Service (COPS) for 2015, for his seven years of service, mostly in the 84th Special Action Company (SAC).

The Metrobank Foundation received 157 nominations this year, but only 10 were chosen. Each COPS awardee will receive a gold medal, a trophy, and a P400,000 cash prize during the formal awarding ceremony on Sept. 3.

“The 10 police officers exemplify the best and brightest of our police force: Of sound mind and keen reflexes, trained to withstand high pressure situations, responsive to the concerns of the citizenry,” said Metrobank Foundation president Aniceto Sobrepeña.

The 84th SAC, or Seaborne, was the assault force in the Jan. 25 SAF operation to arrest two high-profile terrorists in Mamasapano. Nine members of the 84th SAC were among the 44 commandos slaughtered, while 14 were wounded, including team leader Supt. Raymond Train.

Andrada was part of the 84th SAC when it assaulted the known lair of Malaysian bomb maker Zulkifli bin Hir, alias “Marwan.” He survived the encounter unscathed.

After the Mamasapano debacle, Andrada received the Medalya ng Katapangan and the Medalya ng Sugatang Magiting. He also served as the 84th SAC’s police community relations officer, building ties with the local community.

Andrada had spent most of his years with the SAF, taking part in the rescue of hostages and arresting rebels in the 2013 Zamboanga siege for which he received a Medalya ng Kadakilaan. He used to mobilize his comrades whenever the Zamboanga Red Cross needed blood donations.

He left the SAF in May as part of his plans to further his career as a policeman. He is now a training and disciplinary officer at a Philippine National Police training center somewhere in Luzon.

“I sometimes miss being in the SAF, but I have to move forward. I want to be able to share my skills, knowledge and discipline that was instilled in me in the SAF,” Andrada said.

Asked if he believed that his dead comrades should be awarded the Medal of Valor, the highest honor in the PNP, Andrada said he was leaving it up to the proper authorities.

“There are bodies in charge of that, I am just praying for the results,” he said.

Andrada had spent most of his years with the SAF, taking part in the rescue of hostages and arresting rebels in the 2013 Zamboanga siege for which he received a Medalya ng Kadakilaan.

Another Metrobank COPS awardee, SPO4 Florante Ubina, spearheaded an advocacy campaign within the PNP to have the SAF 44 awarded with the Medal of Valor or the commensurate honors due them.

Ubina did so as the president of the 150,000-strong Police Noncommissioned Officers Association. He has been with the PNP for 18 years.

On behalf of his organization, he wrote a letter to the PNP Directorate for Human Resource Doctrine and Development for the recognition of the heroism of the fallen troopers.

“We understand that there is a committee in charge of these awards. There are parameters. Our letter is for representation and to boost the morale of our colleagues, for them to be feted the commensurate recognition,” Ubina said.

He added that he believed that the PNP had done its part to address the matter, amidst disappointment that Train and the late PO2 Romeo Cempron were not included in the list of awardees during Friday’s police service anniversary.

Ubina said he believes the SAF commandos deserved the honor but said he respected the PNP’s decision on the issue.

“We believe that their sacrifices should be recognized, whatever award it is. We know that not everyone will be given the same award, but we are thankful if anyone passes the PNP’s parameters,” Ubina said.

Who among the Mamasapano survivors will get Medal of Valor? PNP now reviewing