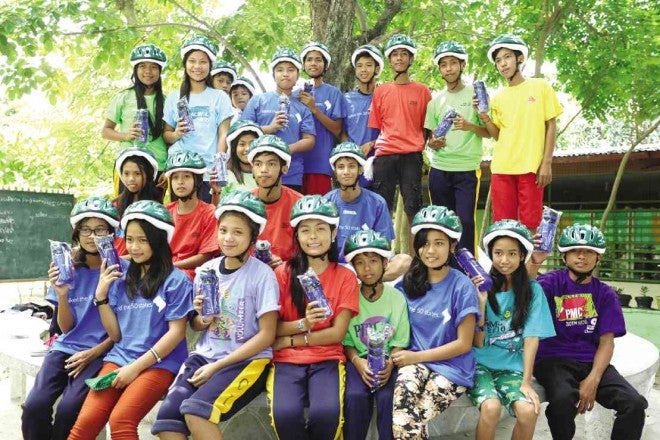 BIKES PLUS Along with bicycles for use in commuting to and from school, CIS students also received training, helmets, water bottles and riding shirts from Bikes for the Philippines.

The Concepcion Integrated School (CIS) is in San Simon, Pampanga province, a town as far-flung as it can get. The roads are narrow, vehicles are few, commercial establishments are scarce and rice fields are aplenty.

CIS, about half an hour away from the town proper, was the venue for the training exercise by Bikes for the Philippines (BFP) for 26 Grade 10 students.

Joel Uichico, a tall and lanky ash-haired man, welcomed the guests, while the 30 or so teenagers and kids around him were starting to look restless. They were itching to get their hands on the bicycles or, more accurately, get their feet on the pedals.

The ceremonial handover of the bikes and the Biking 101 course had been delayed by a couple of hours at that point because Athena Mendoza, the former national cyclist who was going to handle the training, was held up by traffic at the North Luzon Expressway.

Uichico is the man behind Bikes for the Philippines. At CIS, he looked as excited as his protégés, who were raring to test out the secondhand bicycles that came from all over the United States as part of the first wave of donations from Bikes for the World.

It has been quite an adventure for Uichico, who first thought of the idea of giving away bikes to impoverished students four years ago in an ecotourism project in Bohol province when he was working with the Department of Tourism.

In Bohol, Uichico saw kids walking 7 to 10 kilometers to school. He learned from a school official of Baclayon National High School (BNHS) that the dropout rate was high since many students lived in areas of rugged terrain.

Uichico wrote to various foundations to see if he could generate assistance for the Baclayon students. He also contacted his cousin Joe Grant, a cyclist in the United States, to seek the help of Bikes for the World.

Responding to Uichico’s request, Bikes for the World donated more than a hundred bicycles to BNHS students in 2011.

At that time, the 57-year-old Uichico said, “I wasn’t a foundation yet. I was just writing in my individual capacity.” He said he had to rely on sheer volunteerism in the initial stages of his biking endeavor which later became Bikes for Philippines, of which he is president.

“In the first few years we really ran on volunteerism—Athena, Joe, my sister-in-law,  my friends and I. It was more like a ragtag team … But now it’s really an organization,” Uichico said of BFP, which officially became a nongovernment organization in 2013. 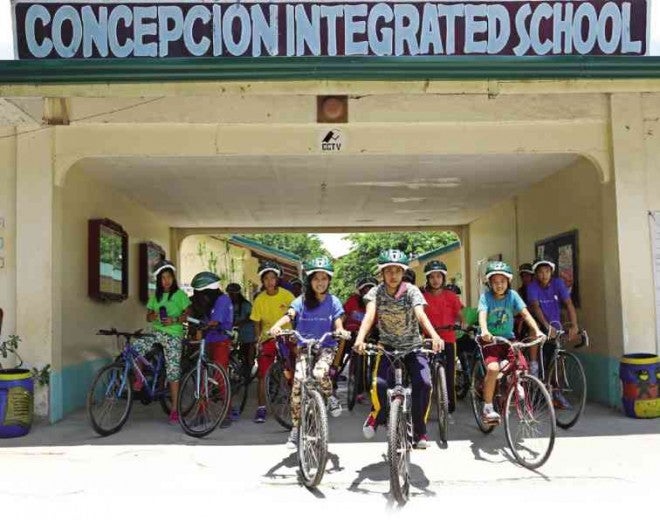 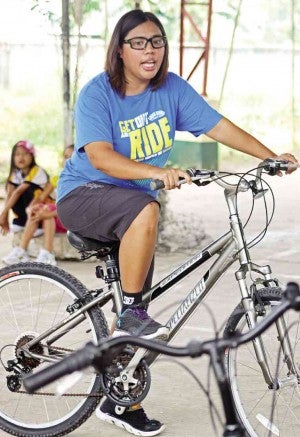 Uichico started the CIS program by having his assistants conduct a roll call of all 26 student beneficiaries.

Priority beneficiaries were those in Grade 10, to encourage them to finish high school. They get to  keep their bicycles if they complete their secondary education on time.

But the 26 recipients also included the Grade 10 students’ younger siblings who also go to CIS. The donors thought it would be an added incentive for the kids to attend classes if they were able to bike to school with their siblings.

Lawrence Pulintan’s two younger brothers, Jericho and Michael, were  obviously delighted to have their own bicycles although they were too shy to say anything.

“Makatutulong po ito sa pag-aaral kasi po maiiwasan po maging late sa school, maiiwasan po  ’yung cutting classes. (This would help us be on time for class and prevent cutting classes),” said Lawrence. He said they were more than capable of taking care of the bikes, including repairs.

San Simon was actually a biking town, said Uichico, who showed pictures on his smartphone of a couple dozen bikes parked at CIS the first time he arrived in town and went on  door-to-door visits of potential beneficiaries.

A few parents attended the informal Sunday ceremony, making it easy for Uichico and the  teachers to maintain order. Some residents who live nearby also watched the activities at CIS. 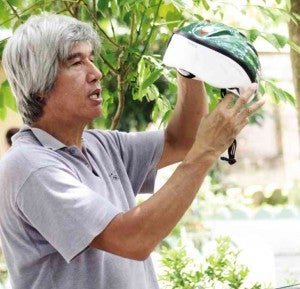 BIKES for the Philippines founder and director Joel Uichico

Many of the students were not exactly strangers to biking, as they demonstrated to Mendoza, who immediately got down  to business after taking a few minutes to catch her breath after her long trip.

The kids hopped on their bikes with the confidence of cowboys mounting their horses, posed for the camera and rode out of the school for the first time. But they had first to listen to Mendoza, particularly to  her tips on road safety.

Basics like standard hand signals for bikers and the proper way of braking and handling road situations, whether riding alone or in a group, were taught.

It was obvious the kids were eager to move into the practical part of the day, listening only halfheartedly to Mendoza’s instructions.

Mendoza did notice that the riders were not exactly neophytes but she also took note of their careless tendencies.

She said the kids were already fundamentally sound in riding and it was just a matter of instilling in them the idea of “safety first.”

“We focused on road safety because kids won’t think about its importance until they encounter an accident. We, as experienced cyclists, know all the dangers,” said Mendoza, a BFP board member and racing organizer who is an official of Union Cycliste Internationale, the world governing body for cycling.

After the safety lecture, Uichico and Mendoza gave the kids the go-ahead to try out their bicycles around San Simon. All the students looked more than ready to put their newly acquired knowledge to the test as they followed their biking teachers’ lead.

The students pedaled with their trainers along the  highway of San Simon, under the scorching noontime sun, as organized a group as one could possibly want. Afterward, Mendoza and Uichico pointed out some minor mistakes.

Despite the heat, the kids welcomed Uichico’s announcement that they would be riding out again after lunch to complete the training.