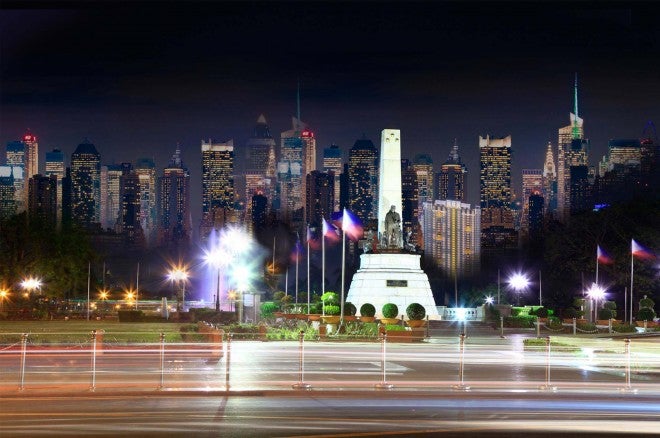 Artist’s rendition of Rizal Monument. This illustration was submitted by DMCI to the Supreme Court

Torre De Manila developer DMCI Homes has turned down proposals to alter the design of the P2.7 billion condominium project to put an end on the argument that it ruins the iconic sight line of the monument of national hero Jose Rizal at Luneta Park.

DMCI Homes lawyer Roberto Dio said on Monday that only the Supreme Court can end the controversy surrounding the Torre de Manila.

The Supreme Court is currently conducting an oral argument on the petition filed by Order of the Knights of Rizal (KOR) which seeks to permanently stop DMCI from proceeding with the construction of the 49-storey Torre de Manila and eventually order the demolition of the condominium.

Dio said there was a suggestion to put a curtain wall and put a mirror-like effects so that it will still reflect Rizal Park.

“If we put there a mirror or something just to address the comments of the Knights of Rizal, it won’t serve its purpose the moment the building in front of it is constructed,” Dio explained noting that Torre de Manila is located behind the old Jai-Alai building.

He said what if the owner of the old Jai-alai building has constructed its own building.

“The only reason everyone is focused on Torre de Manila is because the owner of the Jai-Alai buidling has not yet built its own construction there…So kung nauna ‘yon, wala siguro tayong issue (So if they had built one before, there would have been no issue),” Dio said at a press conference.

Dio added that there are more than 800 unit buyers who are unlikely to agree with the proposal by some groups to change the building’s design.

He added that DMCI actually offered the management of Rizal Park  to plant trees around in order to protect its view from Torre de Manila but it was rejected.

“If we try to ameliorate the situation by addressing the concern of one party we encounter the concerns of other parties,” Dio explained.

“The only win-win solution is for the Supreme Court to do its job of rendering a fair judgment that is consistent with its previous ruling on similar issues,” Dio added.

Dio  also defended Torre de Manila serving as background of the Rizal monument, saying that the Constitution allows a “marriage between heritage and development.”

He cited in particular Article 14, Section 14 of the Constitution which states that: ” The State shall foster the preservation, enrichment, and dynamic evolution of a Filipino national culture based on the principle of unity in diversity in a climate of free artistic and intellectual expression.”

On Tuesday, the high court will conduct part 3 of the Torre de Manila oral arguments. AU