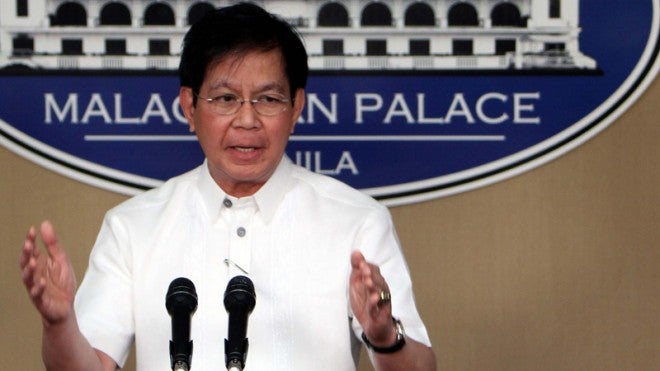 Criminal charges should be filed in the Supreme Court against those responsible for the reinstitution of the Disbursement Allocation Program (DAP) and the Priority Development Assistance Fund (PDAF) in the 2015 national budget, according to former Sen. Panfilo Lacson.

But Lacson is having second thoughts about filing a petition for prohibition himself, preferring to leave it to “like-minded groups” to keep politics from getting in the way since he is running for an elective post in 2016.

He said he plans to schedule a meeting with these groups, particularly the One Million People’s March, Social Watch Group, Freedom from Debt Coalition and Sanlakas.

“I’m thinking, so that this issue will not be politicized, since I will be running for public office next year, I might just turn over all the pieces of evidence that we have in our possession to [them] so they will be the petitioners instead of me,” he said in a text message to the Inquirer.

The former senator has yet to decide whether to run for the presidency or the Senate.

The filing by Lacson of a petition for prohibition in the Supreme Court, scheduled for this week, had to be put off because of amendments to the case. It is expected to be filed later next week.

Lacson’s petition asks the high court to stop the implementation of certain provisions of the 2015 General Appropriations Act, including Sections 70 and 73, which he said were the “obvious reincarnation” of Budget Circular 541, which in turn gave the Department of Budget and Management authority to pool and declare as savings unobligated, unutilized and unreleased appropriations in the second quarter of the year.

These funds were called the DAP, which were intended to ramp up government spending. But like the PDAF, some parts of it were declared by the high court to be unconstitutional last year.

Lacson had earlier found over P420 billion in lump sum appropriations in 11 major line agencies in this year’s national budget.

Last week, he said he found evidence that included photographs and documents showing that a number of congressmen had identified so-called “pork” projects in the budget.