NAGASAKI, Japan—The city of Nagasaki marked the 70th anniversary of the atomic bombing on Sunday with calls to abolish nuclear weapons and halt the Japanese government’s push to loosen restrictions on what its military can do.

With Prime Minister Shinzo Abe in the audience, a representative of Nagasaki bomb survivors told an annual ceremony that security legislation introduced by the Abe government goes against the wishes of the survivors and “will lead to war.”

“We cannot accept this,” 86-year-old Sumiteru Taniguchi said, after describing in graphic detail his traumatic injuries and how others died in the Aug. 9, 1945, attack on Nagasaki.

Representatives from 75 countries, including US Ambassador Caroline Kennedy, were among those gathered under a tall white canopy to shade them from the sun on a 31-degree-Celsius morning at Nagasaki Peace Park.

As a bell tolled, they observed a minute of silence at 11:02 a.m., the time when a US B-29 plane dropped the atomic bomb, killing more than 70,000 people and helping to prompt Japan’s World War II surrender.

Abe’s security bills, which he says are needed to increase Japan’s deterrence capabilities in the face of growing threats in the region, have run into stiff public opposition.

The legislation would ease constitutional limits that restrict the military to self-defense, allowing Japanese forces to defend allies in limited circumstances.

Nagasaki Mayor Tomihisa Taue, addressing the same ceremony, noted the “widespread unease” about the legislation, which has passed the lower house of parliament and is now before the upper house.

“The security bills [that] the government is trying to push through would jeopardize our longtime movement for nuclear abolition and hopes of hibakusha (atom-bomb survivors),” Taue said in a thin voice. “I cannot tolerate the bills.”

“Worries and anxieties are now spreading among us that this pledge made 70 years ago and the principle for peace in the Japanese constitution may be now undermined,” he said to loud applause.

“I urge the government of Japan to listen to these voices of unease and concern,” Taue said.

A message from UN Secretary General Ban Ki-moon echoed calls by Taue and others to abolish nuclear weapons.

“I wholeheartedly join you in sounding a global rallying cry: No more Nagasakis. No more Hiroshimas,” Ban said in a message read by Kim Won-soo, the acting UN high representative for disarmament affairs.

Abe, in brief remarks, said that Japan, as the only country to experience nuclear attacks, would seek to play a leading role in realizing a world without such weapons.

Abe has faced criticism and opposition for his attempts to expand the role of his pacifist country’s Self-Defense Forces.

These would allow them to engage in combat—in defense of an ally that comes under attack—for the first time since the war.

A constitution imposed by a postwar US occupation force prevented the military from engaging in combat except in the nation’s self-defense.

On Aug. 9, 1945, in the now bustling port city of Nagasaki, 74,000 people died in the initial blast near a major arms factory from a plutonium bomb nicknamed “Fat Man.”

Thousands of others perished months or years later from radiation sickness. 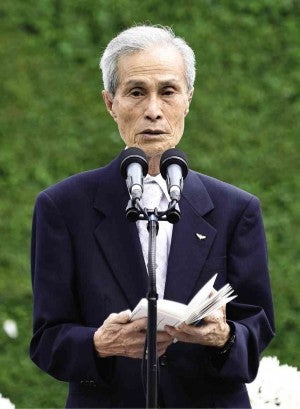 SURVIVOR Sumiteru Taniguchi, 86, a representative of Nagasaki’s atomic bomb survivors, speaks during a ceremony to mark the 70th anniversary of the atomic bombing of the city. AP

On Aug. 6, 1945, the US B-29 bomber Enola Gay dropped a bomb, dubbed “Little Boy,” on Hiroshima in history’s first atomic bombing.

A wall of heat up to 4,000 degrees Celsius—hot enough to melt steel—incinerated that city.

About 140,000 people are estimated to have been killed in the Hiroshima attack, including those who survived the bombing but later died from radiation sickness.

Gums bled, teeth fell out, hair came out in clumps; there were cancers, premature births, malformed babies and sudden deaths.

The twin bombings dealt the final blows to imperial Japan, which surrendered on Aug. 15, 1945, to bring an end to World War II.

While some historians say the atomic bombings prevented many more casualties in a planned land invasion, critics counter that the attacks were not necessary to end the war, arguing that Japan was already heading for imminent defeat.

At memorial ceremonies in Hiroshima on Thursday, Abe said Japan would submit a fresh resolution calling for the abolition of nuclear weapons at the UN General Assembly this year.

“We have been tasked with conveying the inhumanity of nuclear weapons, across generations and borders,” he told the crowd.