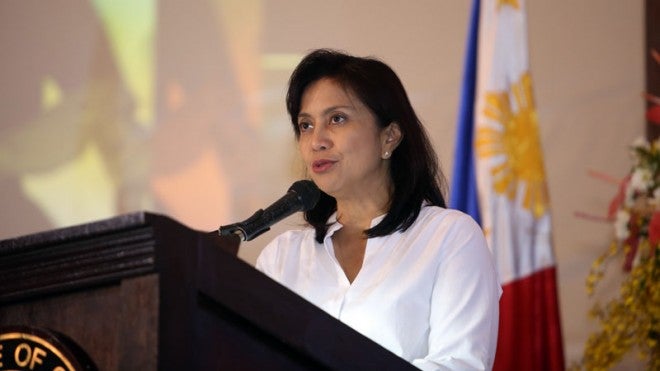 Only when she is considered indispensable to the Liberal Party (LP) will Camarines Sur Rep. Leni Robredo consider a run for Vice President in tandem with Interior Secretary Mar Roxas.

“If I were indispensable, I would consider it. But there are others who are better, more prepared and more popular,” she said in an interview on Radyo Inquirer on Sunday.

Robredo, the widow of Interior Secretary Jesse Robredo, said a vice-presidential campaign was still not among her options in spite of a push by some members of the LP. A civil society group has launched a Leni Robredo for Vice President Movement.

Right now, she said, her options are to seek reelection as representative of her congressional district or to run for a Senate seat.

The ruling LP is actively wooing Sen. Grace Poe, the front-runner in the presidential preference surveys, to run instead for the vice presidency.

But as Poe appears unlikely to accept this offer, the party has floated other possible running mates for Roxas, including Robredo and Batangas Gov. Vilma Santos, who has already ruled this out.

Robredo, a UP School of Economics graduate and a lawyer, said she was grateful to be considered along with these other names, but she thought she could easily be replaced by any one of them.

Too fast, too early

By contrast, when she ran for representative in her district, which includes Naga City, there was a sense that she was direly needed, she said.

“For me, this position is too big for someone who has spent only two years as a public servant. [The vice presidency] is not a small position. It requires a lot of preparations and capability,” Robredo said.

Before he became interior secretary, her husband had served as an innovative multiterm mayor of Naga, for which he received many awards, including the Ramon Magsaysay Award for governance.

“Popularity is not enough, or a push by your allies is not enough. It’s too fast, too early for me to make a decision like that,” she said.

Robredo also noted that her national awareness rating was “still too low.”

She is one of the main proponents of the proposed Freedom of Information law. She has also pushed legislation on good government and transparency in public service.

Like her late husband, Robredo is known for her simple and unassuming ways. Photos of her waiting for a bus to take her to Naga, or avoiding the red carpet in President Aquino’s last State of the Nation Address have raised a stir on social media.

But she said this had always been her family’s way of life even when her husband was still alive. “Taking the bus is the most economical and the most reliable. It’s also what my children are comfortable with,” she said.

“Besides I have no enemies, so I’m not afraid something might happen to me,” she said.

“It has always been known in our hometown that we’re ordinary. We’re not more special than others. We are uncomfortable with attention and with the perks of public office,” she said.

If her husband were alive, there was no way she would have entered politics, she said. “It was always clear that only one person in the family would be in politics. The only reason I entered politics was he died,” she said.

Her husband died in a plane crash off Masbate Island on Aug. 18, 2012. He was on his way to Naga to watch a daughter compete in a swimming event.

Leni Robredo to run as Roxas running mate if…