The Filipino millennials: FEU study can make you :-) or :-( 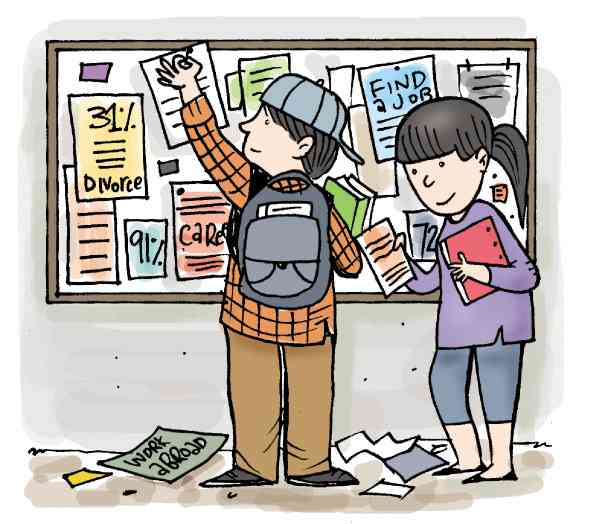 See past the emojis and set aside what you’ve been told so far.

Contrary to popular notions that millennials are just a carefree lot with a high sense of self-entitlement, a study conducted by a Manila-based university found that Filipinos in that age group tend to adhere to homegrown, conservative values yet are raring to take flight and work overseas for a better life.

The study, for example, showed that only 31 percent of the 4,325 college freshmen surveyed approve of legalizing divorce in the predominantly Catholic country.

When it comes to their career, however, they are willing to be uprooted: Close to 75 percent harbor plans of working abroad after graduation because of the higher pay.

But while one of the study’s authors noted signs of “political apathy” among the surveyed youths, another expert saw it differently and said they can be activists in their own online way.

Presented to the media on Thursday, the study was released by the Far Eastern University (FEU) and authored by FEU president Michael Alba and scholar-in-resident Auxencia Alarcon Limjap.

Speaking to reporters at the FEU Makati campus, Alba pointed out that the study was conducted for government and educational institutions to “understand the college student [and] better appreciate what values this generation holds dear… what they aspire for.”

“For the millennial, as a college freshman, maybe they tend to be more conservative compared to the millennials in general. We’re really looking at a smaller segment.”

But he also clarified that it covered only a “certain segment” of millennials, generally defined as the generation born in the period from the early 1980s to early 2000s.

In the survey, the students responded as follows when asked about their reason for pursuing a college education: To get a good job after graduation (91.3 percent); raise a good family (79.9 percent); train in a specific career (76.9 percent); commit to lifelong learning (75.2 percent); and learn things that are personally interesting (75.1 percent).

And despite widespread environmental campaigns, only 46 percent strongly believed in “adopting green practices.”

Their most frequent activity, not surprisingly, is surfing the Internet—either to connect with friends (70.6 percent) or do research (69.3 percent).

Eighty-five percent of the respondents said they had not joined any street demonstration for an advocacy, while 77.2 percent said they had never worked for a political campaign on the national or local level.

To Alba, the figures suggest that this segment of the Filipino millennials are “politically apathetic.”

But one panelist during the study’s launch offered a contrary view. Nielsen Philippines managing director Stuart Jamieson said the advent of social media actually enables millennials to “fight for a cause in a completely different way than what we have seen in the past.”

Alba conceded that his conclusion may be a “narrow interpretation” since it was taken from a baby boomer’s perspective “that being politically active means that you are demonstrating [out on the streets].”

In the next four years, there will be more surveys on millennials to include those in public universities and colleges in the provinces, according to the FEU official.

5 finance things ‘millennials’ should do

Who are the ‘millennials’ and why are they like that–and why not?