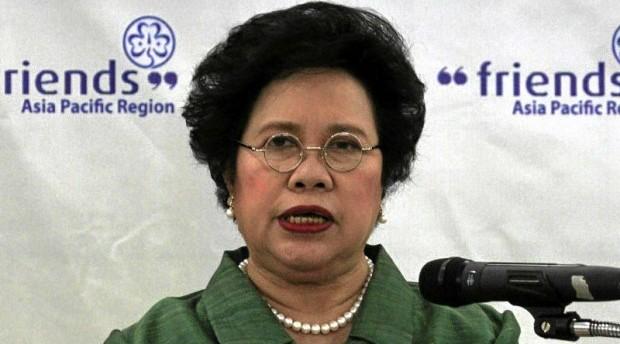 Presidential aspirants should push for the approval of three “sincerity bills,” which would test their position on issues concerning the conduct of politicians, according to Sen. Miriam Defensor-Santiago.

Santiago identified the three measures as the antidynasty bill, the antipremature campaigning bill and the anti-epal bill.

“Self-interest naturally ensures that politicians who will be adversely affected by any of these laws will actively campaign and even vote against it. But if these early presidential contenders mean what they say in media, they must lobby for these bills,” Santiago said in a statement.

Santiago has authored the three bills in the Senate.

None of them have been included in the Senate’s list of priority measures, although President Aquino himself pitched for an antidynasty bill in his last State of the Nation Address.

Sen. Aquilino Pimentel III, electoral reforms committee chair, earlier said he is drafting the final version of the antidynasty bill to be circulated to members for their signature.

The bill, which would limit the number of family members in elective office, seeks to break up the concentration of political power in select families.

“The Constitution regards political dynasties as evil, but the battle against such evil must now be led by the Congress, many of whose members suffer from a conflict of interest on the subject of political dynasties,” Santiago said.

The antipremature campaigning bill seeks to prohibit prospective candidates from engaging in partisan activities a year before the elections.

“The prohibition against premature campaigning will level the playing field for candidates, to equalize the situation between the popular or rich candidate on one hand, and lesser-known or poorer candidates on the other,” Santiago said.

The anti-epal bill, formally known as the antisignage of public works bill, would bar politicians from putting their names or photos on signages announcing a planned, ongoing or finished work project. It will also prohibit signages crediting a public official for a government project.

“Crediting individual public officers instead of the government fosters and promotes a culture of political patronage and corruption. It diminishes the concept of continuity in good governance in the mind of the public,” Santiago said.

Santiago earlier said she might consider running for president, since her lung cancer has been in check.

So far, only two officials have categorically declared that they would run for president in next year’s elections: Vice President Jejomar Binay and Interior Secretary Mar Roxas.

Binay, who has three children holding elective posts, has said he was not in favor of an antidynasty bill, asking why there should be a law that would prevent those who want to serve the country from doing so.